How does a bookseller become a decorated general in the United States Army? General John Ellis Wool did exactly that, distinguishing himself in three consecutive wars: the War of 1812, the Mexican-American War, and the American Civil War. By the time he began service in the Civil War, General Wool was already 77 years old. 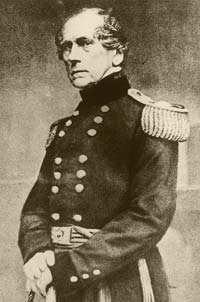 Born on February 20, 1784 in Newbury, New York, Wool would later settle in Troy. He set up shop as a bookseller, only to lose his entire stock in a fire. He resolved to study law. However, when war broke out with the British in 1812, Wool decided to serve his country. He set up a recruitment center in Troy and later led his troops into battle. During the course of the war, Wool was shot through both thighs.

Following the War of 1812, Wool stayed on with the Army. In 1822, he took a professional tour of Europe. In 1836, he was assigned with the removal of the Cherokee to a new reservation. Though he tried to persuade the Cherokee to obey government orders, he also did what he could to protect them. His advocacy invited public criticism—and resulted in Wool's facing a court marshal. He was cleared of all charges.

Meanwhile tensions between the US and Mexico slowly mounted. Texas gained independence from Mexico in 1836, but the US did not immediately bring it into the Union; bringing in another slave state conflicted with northern political interests. Furthermore, the Mexican government encouraged border raids and threatened that any annexation would be considered an act of war. Though relations remained uneasy, a tenuous balance developed among Texas, the United States, and Mexico.

The election of James K Polk would change all that. An ardent expansionist, President Polk wholeheartedly embraced the concept of manifest destiny and believed that the US should reach all the way to the Pacific Ocean. A lynchpin of his campaign was that he wanted to re-annex Texas and re-occupy Oregon.

Polk also had his eye on California, and the US government offered to buy it from Mexico. When the Mexican government rejected the offer, Polk ordered troops into the disputed territory between the Rio Grande and Nueces River—territory that both countries had previously recognized as part of the Mexican state of Coahuila. On April 25, 1846, the Mexican calvary attacked a group of US soldiers who were under the command of General Zachary Taylor. About twelve American solders were killed. Then Mexican troops laid siege to American forts along the Rio Grande. With the help of reinforcements, General Taylor and his troops defeated the Mexicans at both Resaca de la Palma and Palo Alto.

This new aggression from Mexico prompted President Polk to tell Congress that the “cup of forbearance has been exhausted.” On May 13, 1846, over the opposition of many northern legislators, the United States declared war on Mexico. (Mexico, however, never officially declared war.) By August 1846, US troops had seized Santa Fe. It was time for an expedition to Chihuahua. General Wool received orders to gather troops at San Antonio. In October 1846, he and his soldiers crossed the Rio Grande and went to Monclova. There, he received orders to halt until the expiration of the armistice. 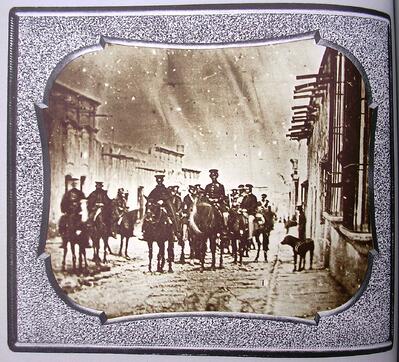 This photograph of General Wool and his troops on horseback in Saltillo is one of the earliest American wartime photographs.

The following month, Wool led his men through mountains and desert to Parras. There he received word that General William T Worth needed assistance at Saltillo, where General Antonio Lopez de Santa Anna was expected any day. The former Cuban exile had bargained with the US government for his return to Mexico, promising that he'd negotiate an end to the war that was favorable to the United States. But as soon as Santa Anna arrived, he took control of the Mexican army and led his troops into battle. At every turn, however, Santa Anna and his troops were defeated.

General Winfield Scott arrived with his troops in Veracruz and easily took the city. Then he initiated a march to Mexico City, essentially taking the same route that Hernan Cortes had taken when he invaded the Aztec empire. The Mexicans resisted, but were repeatedly quashed by US troops. In September 1847, US troops arrived in Mexico City and successfully took Chapultepec Castle. That victory basically ended the war: though guerrilla forces continued, Santa Anna resigned. The US bided its time until a new government could emerge and negotiate an official end to the war. General Taylor returned to the states, leaving Wool in command of the army.

On February 2, 1848, Mexican and American officials signed the Treaty of Guadalupe Hildago. Under the treaty, Mexico agreed to sell California and the rest of its territory north of the Rio Grande for a mere $15 million, plus the promise to cover certain damage claims. Unfortunately for Mexico, gold was discovered in California just days before the treaty was ratified. 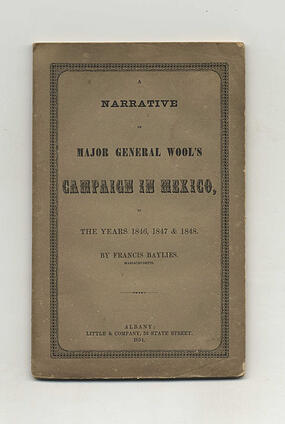 Biography of a War Hero

In 1851, Francis Baylies published A Narrative of Major General Wool's Campaigns in Mexico. In addition to interviewing soldiers who served under Wool's command, Baylies was also lucky enough to interview the general himself. Baylies supplements his valuable account of Wool's actions during the Mexican-American war with a short, campaign-style biography of Wool. The work remains a fascinating article of Americana.