Despite what critics and pundits have been warning for years, people like paper. Ebook sales have become stagnant. Everybody, even the college-aged, prefer to read tangible books. Print culture, for the moment, seems to be doing quite well. This environment has been of a particular benefit to one section of the publishing industry, one which has flourished in recent years. In a world of screens and immediate gratification, people are growing more and more attracted to books made by hand. One of the most impressive successes to emerge from this fine press revolution is the Santa Rosa-based Nawakum Press. 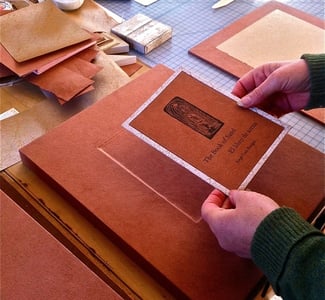 Nawakum applies their eye for quality to every single part of the books they make. They employ brilliant artists and artisans every step of the way. Nothing—whether it’s the paper, the text, the binding, the engraving—is neglected. Here, we’ve compiled some of our favorite books printed by this remarkable press.

All Nawakum books are visually magnificent, but perhaps no project has thus far depended so heavily on the work of the artist like Loom. Richard Wagener was inspired by the loom, in the way it can mirror the various harmonies and disconnects of life. He began with the question, “How many threads does it take to make a weaving?” Each of the sixteen engravings are complemented by a poem, written by Alan Loney.

Loom was printed on a Heidelberg cylinder press. We highly recommend viewing the video below, which offers a great look inside the many talents and processes involved in the making of any Nawakum book.

Rachel Carson is now well-remembered for her eloquent environmentalism. And her writings have made a discernible impact on the way in which we farm and manage our resources. But before all that, she introduced herself to the world with her article “Undersea,” published in The Atlantic Monthly in 1937. In her essay, Carson takes us along an evocative journey along the ocean floor. This very piece provided the genesis of her first book, Under the Sea Wind, which was published in 1941. 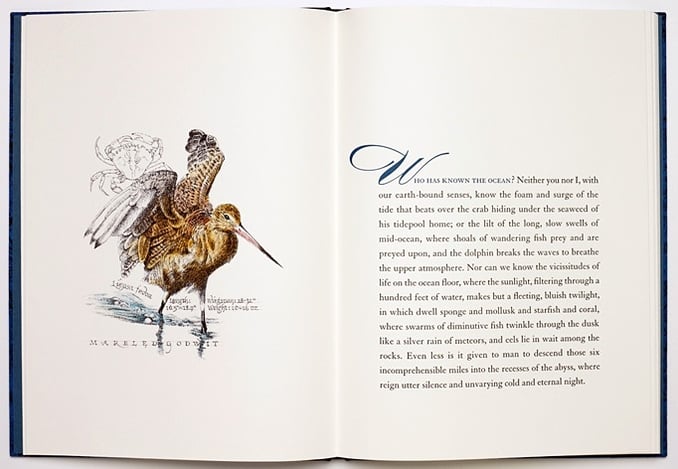 This is the only book on the list that does not feature woodblock engravings. Instead, the reader is treated to colored illustrations by artist Dugald Stermer, who worked as a designer for Harper’s and had clients like the 1984 Olympics. The paper is handmade by Hahnemühle, a German paper manufacturer with origins in the 1500s. Like many of Nawakum’s offerings, this book has a shorter deluxe print run, in addition to the standard edition. While both are bound in exquisite cloth, the deluxe edition is garnished by a goatskin binding and the artist’s signature. 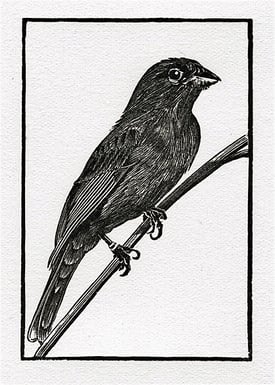 Bly is no stranger to interesting projects. The poet has won the National Book Award and has translated the likes of Rilke, Neruda, and Hafiz. A bit of a departure for the incisive critic of the Vietnam Era, this particular book comprises fifteen of Bly’s love poems. Bly continues to write daily, and is the Poet Laureate of Minnesota.

The book is bound in orange board paper made by Minneapolis-based Cave Paper, and quarter-bound in Italian book cloth. The deluxe edition comes with signed copies of an engraving of the bird that serves as the volume’s namesake. Artist Keith Cranmer has also produced a striking two-color engraving for the frontispiece. 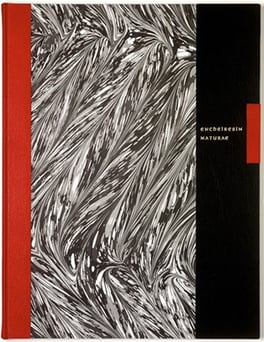 Leave it to Nawakum to bring together two talents as diverse as Paul Muldoon and Barry Moser. This book offers a true collaboration. Beginning with Moser’s abstract engravings, Muldoon was asked to complement each illustration with a poem. The poet then complicated the arrangement by composing a heroic crown of sonnets, in which the final line of a sonnet is to be taken as the first line of the following one. Not only that, but the final sonnet comprises the first lines of each of the fourteen sonnets, in order. Along with the revered Moser’s return to abstract engraving, this book is among the most original any fine press collector could hope to have.

The book is bound in half leather with marbled overboards. The drop spine box is equally interesting. It is not only bound in Japanese cloth, but features a hand-annealed copper plate. As is to be expected, all of Barry Moser’s exquisite engravings are printed from the original block.

Coming off the unimpressive reception of his inimitable novel, Moby Dick, Herman Melville published this story in Putnam’s Magazine in 1854. It was written as one of eight sketches for the magazine, and introduces a Peruvian woman marooned on an island in the Pacific. This story, with its philosophical power and feminist focus, has become an important part of the way in which we reclaim Melville, as not some one-novel writer, but as an all-around master of letters. 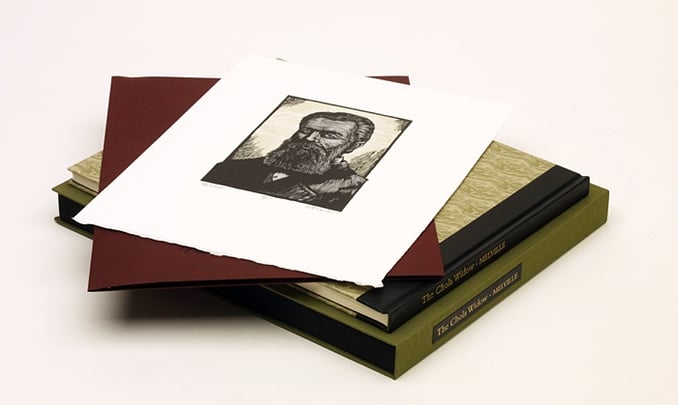 The volume includes an introduction by Melville scholar John Bryant. Each of the one hundred copies is signed by Rik Olson, the artist behind the book’s remarkable engravings. The covers are quarter bound in Japanese cloth, with patterned paper covers designed by the artist. The standard version comes with a slipcase, and the deluxe with a drop spine box.

In a fast-paced and hurried world, presses like Nawakum ask us to pause, and to remember that every part of the book is a thing worth treasuring.