Herbert George Wells was born on September 21, 1866 in Bromley, England. His father was a professional cricket player who also ran an unsuccessful porcelain and cricket supply business. Wells was a bright child who began reading at a young age—kindling a life-long passion for literature. In 1874, he began schooling at Thomas Morley’s Commercial Academy where he learned trades specific for retail occupations. His education was cut short in 1880, however, when his father’s leg injury put an end to his cricket career and left the family financially unstable. 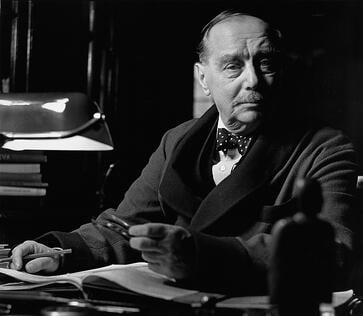 H. G. Wells spent the following three years working as an apprentice in Windsor and Southsea. There he worked as a draper—a merchant who sells clothing fabric. He was unhappy with his apprenticeship; he worked long days and spent evenings in a dorm filled with other boys. He finally left to work as a student teacher at Midhurst Grammar School. A year later, he was awarded a scholarship to the Normal School of Science where he would study biology with Thomas Henry Huxley—an English biologist known for his promotion of Darwin beliefs.

Wells studied there until 1887 when he decided to pursue other interests including newspaper writing and teaching in public schools. Coincidentally, during his time teaching at the Henley School House, one of his star pupils was A.A. Milne—creator of Winnie the Pooh. Wells received his bachelor’s degree in zoology 1890 from the University of London, through their distance learning program. He married his first wife in 1891; however, their marriage did not last long due to his infidelities. Wells then married former student, Amy "Jane" Catherine Robbins in 1895.

In 1893, Wells began to focus on his writing. During these early years, Wells would write his famous “scientific romances”—now called "science fiction." His illustrious writing career began with his publication of The Time Machine in 1895. Wells’ novel introduced the term “time machine” into the English language—a phrase still popularly used today—and the concept behind the term caught the public's imagination. 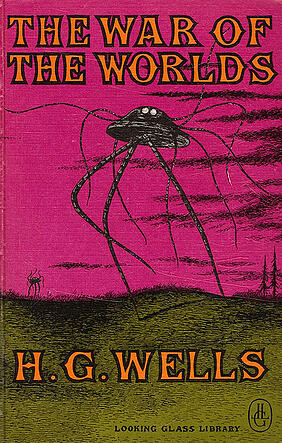 His second book, The Island of Doctor Moreau (1896) is narrated by character Edward Prendick, a man who survives a shipwreck, only to be washed ashore on an island owned by Dr. Moreau. Moreau had been a renowned psychologist before his macabre studies on vivisection had been revealed, forcing him to flee and re-create his life on an isolated island. Wells’ novel called on several socio-philosophical issues of the time including the human identity and how it relates to animals and nature, ethics, and animal cruelty.

His third and arguably most popular novel, War of the Worlds, was published in 1898. The book was originally printed in serially through both Cosmopolitan and Pearson’s Magazine in 1897. Wells' novel once again touched on a subject matter rarely explored before—extraterrestrial life. Although his plot describes creatures from outer space taking over Earth, his book has been seen as a critique on British Imperialism and the Victorian worldview. War of the Worlds has influenced countless stories, films, and television shows. Perhaps the most notable adaptation was Orson Welles' 1938 broadcast in which the story was presented as a news bulletin, not fiction.

Although Wells’ first works were his most popular, he continued to publish novels and short stories throughout his life. Wells became increasingly active in politics and his socialist views were apparent in his later writing. He passed away on August 13, 1946 at the age of 79, leaving behind a formidable legacy as one of the English language's great novelists. Moreover, his work founded the science fiction genre as we know it today.