The feats of Harry Houdini amaze us even today. In his Chinese Water Torture trick, Houdini was suspended upside down in a locked glass-and-steel cabinet overflowing with water. In another stunt, he strapped himself into a straitjacket and then, suspended by his ankles, would escape before a crowd of onlookers. Sometimes he dislocated his shoulders in the process. Even now, nearly a century after his death, Harry Houdini remains the world's most well-known magician. 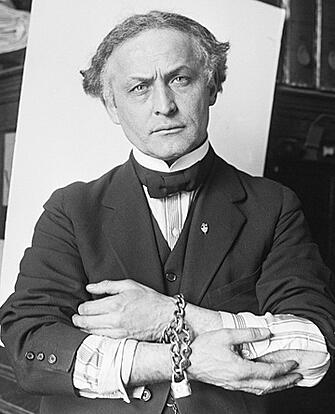 Houdini was born as Erik Weisz in 1874 Budapest, one of seven children. The Weisz family left Europe in 1878 for the United States where Houdini's father was able to get a rabbinical position at Zion Reform Jewish Congregation in Wisconsin. The family changed their name to Weiss, and Houdini's first name, Erik, was changed to Ehrich, though his friends nicknamed him 'Harry'.

In 1887, Houdini's father moved the family to New York City. It was there that Houdini's incredible athleticism emerged and at just 9 years old, he became a trapeze artist. When Harry became a professional magician, he adopted the last name Houdini, after the French magician Jean Eugene Robert-Houdin. During his career, Houdini explained some of his tricks in books written for the magic brotherhood, such as in Handcuff Secrets, a detailed account of how handcuffs operate. More of his tricks are detailed in Houdini's Escapes: Prepared From Houdini's Private Notebooks And Memoranda, With The Assistance of Beatrice Houdini, Widow of Houdini.

In 1894, Houdini married 18-year-old Wilhelmina Beatrice Rahner, or "Bess." She was a fellow performer from Brooklyn and became Harry's assistant. Their act took them on the road and in the spring of 1899, Houdini finally received some major attention from Martin Beck, a tycoon in the vaudeville theater world, who first saw Houdini perform his handcuff routine in a beer garden in St. Paul, Minnesota. By year's end, Beck garnered leading roles for the Houdinis in vaudeville houses throughout the United States. Vaudeville was the venue that made Houdini a star. 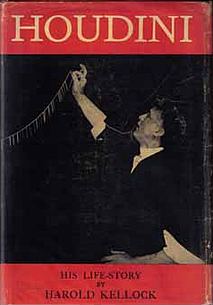 Notoriety for Houdini also meant gaining fame in Europe. For five years he toured the continent. He accepted challenges from his audience, including a noteworthy one from The London Mirror, which commissioned special handcuffs for Houdini. The audience was elated when the magician finally freed himself after an hour-long attempt. In Germany, Houdini drew attention after a conflict with a Cologne policeman who accused Houdini of fraud and slander. This controversy only resulted in more fame for Houdini with the Germans proclaiming that he was the "König der Handschellen", or the "King of Handcuffs."

After conquering Europe, Houdini returned to America in 1905. As the motion picture industry advanced, Houdini used it to reach an even greater audience. After almost three decades of public performances, films allowed Houdini to became one of Hollywood's first action heroes, showing his escapes on the large screen.

In the 1920s, Houdini spent much time criticizing those involved in spiritualism, a movement that believed fairies roamed the earth and that people could communicate with the dead. His disdain for spiritualism lead to the severing of his relationship with famed spiritualist and author, Sir Arthur Conan Doyle. Houdini's training in magic gave him the tools to expose frauds in the spiritualist movement. He was a member of a Scientific American committee that gave a cash prize to anyone who could clearly demonstrate supernatural abilities. No one has ever received the prize.

Harry Houdini died in 1926 from an aggravated case of appendicitis. Although only 52 years old at the time of his death, Houdini's legacy has withstood the test of time.