President Harry S. Truman was not always a popular president. Rather like Donald Trump in the Trump/Clinton Election of 2016, when Truman ran for reelection, most predicted a loss for him. The mainstream media had written him off, and polls inaccurately portrayed his chances. He shocked the country when he managed to pull off the victory on election day. His work as both a war time and peace time president sets him apart from many leaders who can only accomplish one leadership style.

Harry Truman was born May 8, 1884 in Lamar, Missouri. After graduating from high school in 1901, he worked as a timekeeper and a bank clerk before returning to his family farm to help his father. He served in the 129th Field Artillery in France during World War I and was promoted to captain, eventually joining the reserve after the war where he became a colonel. In 1919, he married Bess Wallace, who gave birth to their only child, mystery author Mary Truman, in 1924. Truman was elected as a judge in 1922, establishing a reputation that helped him be elected to the United States Senate in 1934. After his reelection in 1940, he headed the Truman Committee, which investigated the National Defense Program.

In 1944, Truman was elected to run as Vice President with President Franklin D. Roosevelt, who died after only 82 days into his fourth term in office. Truman took over as as president, and during his first year in office, Truman helped end World War II in Europe, approved the use of two atomic bombs against Japan, ending the war in the Pacific Theater, and helped found the United Nations.

Much of Truman’s presidency was marked by his efforts to prevent the Soviet Union from expanding its influence, a strategy that became known as the Truman Doctrine. For his domestic policies, Truman focused on trying to extend FDR’s New Deal and introducing new civil rights legislation, neither of which gained any traction in the Republican Congress, pushing Truman to use executive orders. 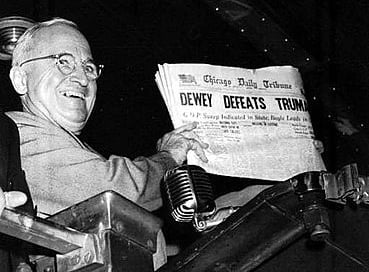 When he ran for election in 1948, no one gave Truman much of a chance of winning. He took a hard stance on civil rights which many in his party thought would ostracize their "Dixiecrat" voter-base in the south. The Democratic party appeared to be on the brink of disaster in its first major election following FDR's death. But Truman took to the American people, and journeyed across the country to speak to voters. This seemed to make all the difference.

Still, the majority of the press thought that Republican candidate Thomas Dewey was a shoo-in for president. The polls gave Dewey a clear advantage; however, they were mostly compiled based on phone call data. Many of Truman's supporters didn't own telephones, which could have been one way the polling results were skewed. Likewise, the timing of when the poll data were collected could have missed Truman's increase in popularity with the American people. As it was, Truman ended up winning the election with 303 electoral votes to Dewey's 189. Strom Thurmond, who ran on a Dixiecrat ticket, obtained 39 electoral votes. 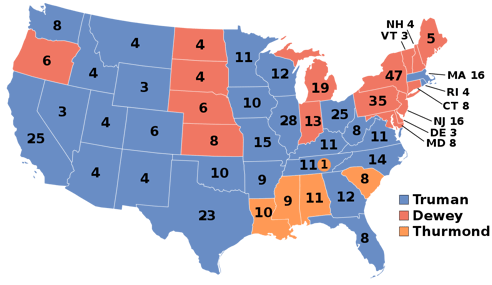 In his second term, Truman dealt with the Korean War, Soviet interference, and an attempted assassination. When he left office, his approval rating was in the mid 30%.

After retiring from the presidency, Truman moved back to Independence, Missouri in 1953. He oversaw the construction of his presidential library and continued to work in his office there after its completion. There, he spent his time preserving his legacy. The first volume of his memoirs was published in 1955, followed by the second volume in 1956. Despite retiring, Truman never left his public life behind. He regularly commented on politics and actively campaigned against Eisenhower in 1956. Truman died on December 26, 1972 and was buried in the courtyard of his presidential library.

Written by historian David McCullough, Truman gives a chronological biography of President Truman’s life. McCullough examines Truman’s life and the decisions made during Truman’s presidency, covering topics from the atomic bombs used on Hiroshima and Nagasaki to the meeting with Joseph Stalin to the Korean War.

A second notable work on Truman’s life is Robert Hugh Ferrell’s Harry S. Truman: A Life. Despite being overshadowed by McCullough’s similar work, Ferrell’s contribution was praised by other scholars in his field when it was first released in 1994.

Another work of note is Truman’s autobiography, The Autobiography of Harry S. Truman. Consisting of a compilation of Truman’s writings from between 1934 and 1972, he discusses his life before his terms in office and his time as president.