How to Collect Books in Foreign Languages

For most of us, reading world literature requires translation. Unless you’re fluent in the languages of the globe, from Arabic to Khmer to Zulu, you’ve probably picked up a novel or book of poems that has already been translated for you. What happens when we discover an author whose original works are not in English, and we’re interested in collecting? Collecting books in foreign languages can seem like a daunting task, particularly when we don’t speak the language. Yet one of the most exciting finds of, say, a Günter Grass novel, happens when we locate a German-language first edition.

How can you collect books in a foreign language when language barriers exist? It’s not only possible, but it can be an exciting and very rewarding challenge.

How can you search for books you’ve read (and loved) in foreign languages? First thing’s first: if you can’t read the language in which the book has been written, it’s not too difficult to teach yourself a little bit about translation. What’s the best way to do this? For many writers whose works have been published in translation, you can obtain a bibliography (a book unto itself) of that author’s texts.

For example, maybe you read Gabriel García Márquez’s One Hundred Years of Solitude [Cien Años de Soledad] and The Autumn of the Patriarch [El Otoño Del Patriarca] in English, and you fell in love with those novels. Now, you’re interested in collecting works of García Márquez, but you don’t know where to turn. An annotated bibliography can be a great place to start. Margaret Eustella Fau compiled Gabriel Garcia Marquez: An Annotated Bibliography, 1947-1979 in 1980. Inside such an annotated bibliography, you can find information about the Spanish-language first editions of the novels you’d like to add to your collection, including the original publisher and the date of publication. In bibliographies like Fau’s, you can also find scholarly information that can assist you with your collecting.

You might also keep a list handy of the books you’re seeking. For collectors of Umberto Eco, that list is going to be quite long. Given that Eco began writing scholarly works long before he became known as the world-famous author of The Name of the Rose [Il Nome Della Rosa], he had published many nonfiction texts, such as Opera Aperta (1967), Il Problema Estetico In Tommaso D’Quino (1970), and Il Segno (1973). 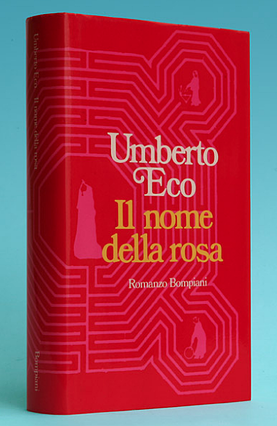 In addition to identifying titles and their respective translations, it can also be helpful if you know which press or publishing house produced your author’s works. For example, Günter Grass’s early German-language novels were published by Hermann Luchterhand, a press out of Darmstadt, a city near Frankfurt in what was then West Germany. When you’re browsing online book catalogues, you might run a search for Luchterhand, keeping in mind some of Grass’s most important German-language titles. For example, German first editions of The Tin Drum [Die Blechtrommel] are especially scarce, as are titles like The Meeting at the Telgte: A Story [Das Treffen in Telgte: Eine Erzählung].

And don’t forget that you can seek out original editions and translations in any language. For instance, you might seek out a German-language translation of Eco’s In the Name of the Rose, translated as Der Name der Rose. Indeed, while many of the most widely circulated authors in the West write in European languages, it’s important to remember that you might be able to find interesting translations in less commonly read languages. Why not seek out an Eco novel translated into Punjabi or Vietnamese to add geographic and cultural breadth to your collection?

Whether you're looking for novels written in their original language in bookstores in the U.S., or seeking out new translations while traveling abroad, expanding your collection's linguistic borders can open up new ideas about how to collect and how to organize your collection. In short, collecting in a foreign language isn't always easy, but it can be an exciting and deeply rewarding experience.