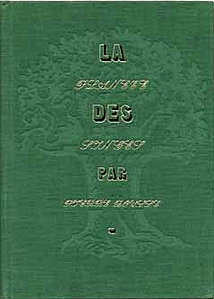 There are some notable exceptions in which the book club edition may actually be the first edition, such as with Pierre Boulle's La Planète des Singes (The Planet of the Apes), pictured at left, where the true first French edition of the original text is also the book club edition for Le Cercle de nouveau livre. But this is the exception, rather than the rule.

For as long as books have existed, people have gathered to discuss them. These often ad hoc reading groups grew even more prevalent with the invention of the printing press, which brought books to a wider audience. Books were still expensive, so it wasn't uncommon for people to pool their money to buy a book to share. Eventually this trend would evolve into the formation of library societies. In the United States, the first such organization was the New York Society Library (founded in 1754), closely followed by the Boston Library Society. Similar paid libraries popped up around the country over the next century, and some still exist today as literary societies or social organizations. 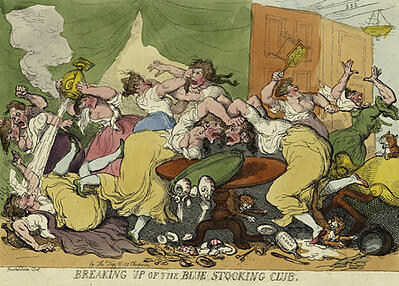 Meanwhile, in the seventeenth and eighteenth centuries, the literary salon became quite popular. Salons proved an excellent means for women to gain the intellectual stimulation and autonomy they sought. Women would host the events and invite their female friends. Usually a male luminary would be invited to be the guest speaker for the evening. Eventually salons became gatherings for leading socialites, intellegentsia, and politicians. The women who attended earned the nickname "bluestockings," which by 1863 had come to mean "pedantic or ridiculously literary ladies," at least according to the 1863 New American Cyclopedia.

The first American book club as we think of the groups today was formed in 1877, in Mattoon, Illinois. Unlike the salon, this book club was open to members of the community, regardless of socioeconomic status or educational background. The book club came to be seen as a means of giving the working class access to higher culture and education. Boston's Saturday Evening Girl's Club, founded in 1899, catered to the intellectual needs of working-class women and girls in the city's north end, who usually had little or no access to formal education.

Improvements in printing technology both fueled interest in book clubs and supported it. In the 1870's and 1880's, books were increasingly sold by subscription. And from 1880 to 1900, three times as many books were published as were published before the Civil War. Then the 1920's brought new economic growth, and the book club acted as a sort of doorway to mainstream social progress. The Literary Guild was founded in 1921; the Book-of-the-Month Club in 1926.

By 1947, there were over three million book-club members in America. That year, the Great Books Foundation was launched by two University of Chicago scholars. Its aim: "the noble work of self-improvement." The Foundation offered guided discussion on canonical texts. Then in 1951, Columbia University professors Lionel Trilling and Jacques Barzun teamed up with celebrated poet WH Auden to start the Readers' Subscription Club, whose purpose was, in the words of Barzun, "to create an audience for books that otehr clubs considered to be too far above the public taste." Thus book clubs had again veered back to the scholarly elite.

But America's level of education was also changing. In 1920, there were 600,000 people enrolled in college. Only thirty years later, that number had ballooned to more than two million. Thus, that lofty goal of democratizing high culture, a popular ideal of the late nineteenth and early twentieth centuries, had essentially been attained. A correlation of national bestsellers, book club selections, and critically acclaimed literature indicates that more and more book clubs were in fact choosing "high brow" books.

Today, thanks to the internet, book clubs can meet both in person and online. It's difficult to count exactly how many people participate in them. For collectors, the designation of "Book Club edition" can be a confusing one.

How to Identify Book Club Editions

A book club edition may or may not be a special edition issued just for members, and it's usually not the first edition. Thus, the books don't generally garner much interest among serious collectors. But they can be terrific reading copies or a great place to start for new collectors who are interested in modern first editions.

How to Identify Book of the Month Club Editions

Since it was founded in 1926, the Book of the Month Club has been incredibly popular. The club offers its members several selections each month, and these generally include a few books from frequently collected authors. These points can be used to identify Book of the Month Club editions, along with editions from a few other book clubs.

In most cases, book clubs simply buy trade editions from a publisher's general run and resell them to members without altering the books or their jackets in any way. This means that book club editions are the same as trade editions. They can be identified as first editions simply by consulting the publisher's statements for first edition identification. In other cases, book clubs are large enough to make changes to the books.

Do you want to find out more about books and their identification?