Illustrations and Woodcuts of Mary Azarian

Renowned artist Mary Azarian has been working on woodcuts since the fourth grade. Now, she runs a one-woman woodcutting business, doing all of her own printing, painting, packaging, and distributing. Her woodcuts are inspired by the nature that surrounds her, and she says she's drawn much inspiration from her own life and experiences in the natural world. Azarian has illustrated over 50 books. Her most well known work is in the children's book Snowflake Bentley which won the 1999 Caldecott Medal.

Azarian graduated from Smith College in the 1960s. Initially she majored in medicine. This quickly changed when she discovered her passion for art, in particular printmaking and etching. In fact, while in school, she was able to study under Leonard Baskin, a highly esteemed printmaker.

When Azarian and her husband, Tom, left college, they moved to northern Vermont and began living off the land as farmers. Azarian secured a job as a teacher in a one-room-schoolhouse to supplement their farming work; however, after the birth of their second child, she began considering a way she could work from home. She settled on her passion for woodcutting.

To create her wood blocks, Azarian draws an image onto a piece of wood. After doing so, she carves out the image. Azarian then prints the woodblocks using a salvaged proofpress from the 19th century. Every step of the process takes great care and precision. Azarian's work is incredibly fascinating, and in a way, both the form and the product ties her to a bygone era. 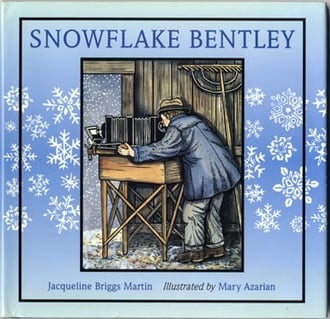 When Azarian turned to woodcutting, it wasn't only because she loved the art form but also because she wanted something she could produce that was affordable enough for her neighbors to be able to purchase. Thanks to grant money from the state of Vermont, she was able to make a rural themed alphabet. Initially, New York publishers were reluctant to put woodcuts in children's books. This reluctance was an attitude that Azarian would gradually change through her publication of alphabet and other books.

In the late '90s, Azarian agreed to illustrate Snowflake Bentley, a book written by Jacqueline Briggs Martin about a Vermont farm boy who was fascinated with snow. Indeed, Wilson Bentley made snow and snowflakes his life work. Like Azarian, it is almost as if Bentley was a man out of time and place. Azarian shared his love for snow, and the more she researched Bentley, the more her respect for the man grew. Bentley used a camera with an attached microscope to take pictures of snowflakes. It took several years for Bentley to figure out a method that allowed him to photograph the flakes without them melting. Bentley considered his beautiful photos a “gift to the world,” and every penny he made from selling prints went back into his passion.

Jacqueline Briggs Martin's biography, coupled with Azarian's woodcuts, brings Bentley's snowflake story to life for children everywhere. It's a perfect testament to both Bentley's hard work and dedication to his craft, along with that of Azarian: the natural world is full of wonder. All we must do is seek it out.