Presidential inaugural addresses have provided us with some memorable presidential quotes, including Lincoln’s “With malice toward none, with charity for all, with firmness in the right as God gives us to see the right, let us strive on to finish the work we are in…” and FDR’s “the only thing we have to fear is fear itself.” In a way, the inaugural speech is something of a spoken word exposé. While some presidents have succeeded in waxing their own type of poetry, some, too, have invited actual poets to share the stage. In fact, inauguration ceremonies have included a poet on five occasions. One of the most memorable instances came during Bill Clinton’s inauguration in 1993 when the late, great Maya Angelou took the podium.

Before Clinton’s selection of Maya Angelou as inaugural poet, only one other president had done so. In 1961, John F. Kennedy invited Robert Frost to speak at his inauguration; however, it wasn’t without some trepidation. Reportedly, Kennedy feared that having Frost say a few words may take away from the message he hoped to declare. Frost ended up reciting “The Gift Outright,” a poem he had written and memorized before. The poem he had drafted for the inauguration, “Dedication,” was too difficult to read due to the glare of the sun. Interestingly enough, Kennedy, for his part, delivered some of the most unforgettable words in any presidential inaugural address: “Ask not what your country can do for you but what you can do for your country.”

Thirty two years after Kennedy’s inauguration, Clinton called upon Maya Angelou to be the second ever inaugural poet during his first inauguration ceremony. By this point in her illustrious life, Angelou had reached the pinnacle of artistic expression. She was a singer and dancer in her early years. She worked tirelessly as a key figure in the Civil Rights movement. And she had already successfully published her well known, I Know Why the Caged Bird Sings (1970) as well as All God’s Children Need Traveling Shoes (1986), among other volumes of her esteemed autobiography.

Maya Angelou wrote the poem, “On the Pulse of the Morning” for Clinton’s inauguration. When asked in an interview with Bryant Gumbel about the essence of the poem, Angelou commented on her attempts to write “for the American people,” and her hope that we would all “look at each other,” and “find trust in each other’s eyes.”

Angelou claimed in the same interview that she was nervous about reciting the poem and controlling the emotions that were sure to come along with it. She need not have been. On that brisk January 20 morning in 1993, her recitation resonated deeply and earned her critical acclaim. The whole poem, and especially its final lines, was incredibly fitting for the dawn of a new presidency. She read with the same passion with which she lived her entire life: “Here, on the pulse of this new day/ You may have the grace to look up and out/ And into your sister’s eyes, and into/ Your brother’s face, your country/ And say simply/ Very simply/ With hope - - / Good morning.” 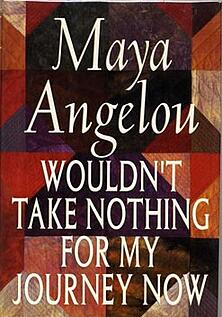 Her words were heard around the country and around the world, and “On the Pulse of the Morning” quickly became Angelou’s most recognizable poetic achievement. The poem pushed Angelou directly into the public eye, making her a sort of poetic celebrity. In commenting on it to Entertainment Weekly, Angelou said, “I think my delivery (at the inauguration) had its own impact. Before, I could pass 100 people and maybe 10 would recognize me. Now, maybe 40 percent recognize me. If they hear my voice, another 30 percent do too."

Fame from Angelou’s inaugural appearance also resulted in an increase in sales of her other written works. I Know Why a Caged Bird Sings reappeared on the paperback bestseller list, and sales of her other paperbacks increased by about 600 percent according to the same Entertainment Weekly article.

Her performance at Clinton’s inauguration earned her a Grammy in 1993 for Best Spoken Word Album. If you haven't viewed it, you can watch Angelou’s moving recitation below and see for yourself why her spoken word had such an impact. Perhaps we all could step back and benefit from truly looking at each other, just as Angelou suggested.