James Augustine Aloysius Joyce was one of 10 children of May and John Joyce. He was born in Dublin in 1882. The family is described as a bourgeois Catholic family. James attended a Jesuit boarding school until 1891 when financial worries meant the family could no longer afford to send him there. He was home-schooled for a while, spent a short time at a Christian Brothers school, and started at Belvedere College, a Jesuit day school. 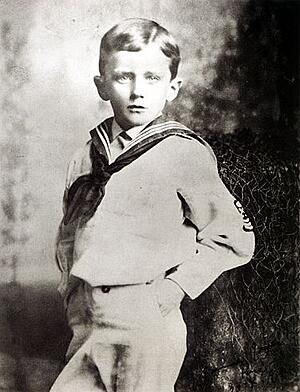 Joyce's childhood was strongly influenced by his father, who is described as charismatic, but increasingly alcohol dependent, and difficult. Ongoing financial troubles led to regular domestic upheaval. But these passions, eccentricities, along with his gift as a singer are all celebrated in James's writing.

Joyce attended University College Dublin where he studied modern languages as well as Latin and logic. He left and went to Paris intending to study medicine. Once there, he found he was not suited to that endeavor and did not have the requisite qualifications. He relied on irregular work as a teacher, bank clerk, cinema owner, and tweed importer, as well as patrons and supporters of his writing.

When his mother became ill in 1903 he returned to Ireland but refused to take the sacraments or kneel at her deathbed. In June of 1904 he met Nora Barnacle, with whom he spent the rest of his life. He and Nora left Ireland in the fall of 1904, and he never returned. They stayed in exile and lived in Trieste, Zurich, Rome, and Paris.

Joyce is said to have had a near lifetime of medical issues and discomfort. He had anterior uveitis that led to about a dozen eye surgeries over his lifetime. He was virtually blind for periods of time. Because ophthalmology wasn't very sophisticated at that time, and he refused to listen to medical advice, scholars speculate his iritis, glaucoma, and cataracts could have been caused by sarcoidosis, syphilis, tuberculosis, or any number of congenital problems.

In January of 1941, he was admitted to a Zurich hospital for a perforated duodenal ulcer. He went into a coma after surgery and died soon thereafter. His last words are reported to have been "Does nobody understand?"

The Phenomena that is Ulysses

Perhaps the most well-known of Joyce's books is Ulysses. It is said it may be more talked about than read. Its reputation for difficulty masks the extent to which it is warm, welcoming, and witty. The book presents a unique and intimate perspective on what it is to be human. In having the lead character, Bloom, use the clipped speech patterns of a telegram, the reader gains a new kind of access to his consciousness. Readers can learn not just what he thinks, but how he thinks as they follow the trajectories of his thoughts.

It seems that the elaborately ponderous writing is designed to wear out the reader so that they participate vicariously in Bloom's mental and physical fatigue. Even the most sympathetic reader could be disconcerted by the intimacy of the writing. When Ezra Pound was sent the description of Bloom's visit to the outhouse it is reported he was appalled. His shock anticipated the uproar Ulysses would later cause.

Those judging the book to be obscene are missing the point. The central achievement of Ulyssesis its humane dedication to recreating everyday life with an intoxicating intimacy. This is how it earned its immortality.

An ironic journey to publication

Publishing is perhaps not one of the most fast-paced businesses around, but when it came to introducing a novel that had been decried as being full of blasphemies and lack of talent it was an interesting journey. A number of women played a role in getting Ulysses published and distributed. There was Joyce's muse, his wife Nora Barnacle, who never did read the book. There was his longtime patron Harriet Weaver, described as a genteel Englishwoman who published excerpts in her literary magazine as well as providing cash totaling a million dollars in today's money to support Joyce.

There were the editors who first risked prison and fines to publish bits of Ulysses in their journal, Margaret Anderson and Jane Heap. There was the bookseller Sylvia Beach who produced the first full edition of the novel. And according to Salon, when a New York City bookstore needed middlemen to receive copies smuggled in from Paris, all the volunteers were women.

The irony in all this was perfect. The laws that banned the novel in England and the U.S. were meant to protect the delicate sensibilities of female readers.

Due to the efforts of Bennett Cerf and his upstart publishing company, Random House, and civil rights attorney Morris Ernst, the book got a serious hearing a decade later. One of the issues was the definition of obscenity. All involved agreed this book was not pornography. The understanding at the time was that obscenity only required that women and children could be tainted by exposure to the raciest passages in the book.

This case, United States v. One Book Called Ulysses, overturned that definition of obscenity forever. The trial judge found that the novel turned filth into art. In fact, that was the point of it. Joyce wanted the right to freedom of speech to encompass not the right to preach political revolution but to speak with total honesty about the everyday intimate experience.

The decision by the United States District Court for the Southern District of New York was about freedom of expression, the question being was this book obscene. Judge John Woolsey said it was not. This opened the door to importing of works of literature using coarse language and involving sexual subjects. The decision was upheld by the United States Court of Appeals for the Second Circuit. They confirmed that offensive language in a literary work is not obscene where it does not promote lust.

The U.S. Attorney appealed Judge Woolsey's decision to the Court of Appeals where it was affirmed by a two-to-one vote. The majority was comprised of Judges Learned Hand and Augustus Hand, with Chief Judge Martin Manton dissenting.

The Judges Hand felt the case was receiving undue attention and agreed their opinion should contain no quotable lines. The decision was drafted by Augustus Hand because his cousin, Learned Hand, was believed to have far more memorable writing skills.

The Court discussed a number of other works, from classic literature to the sciences, and even sex instruction, where each could be said to contain passages that were obscene, but where the books were not banned because they did not promote lust. The majority disagreed with precedents where courts were allowed to decide the question of obscenity on the basis of isolated passages. This Court held the proper test is the dominant effect of the particular book

The majority opinion concluded with the historical perspective of the harms of overzealous censorship. Taken together the trial and appellate decisions establish that a court applying obscenity standards should consider the work as a whole; the work's effect on an average person; and contemporary community standards.

The significance of this case far exceeds its immediate and eventual precedential effect. The Circuit Court's decision set the precedent but the trial court opinion is said to be the most widely distributed judicial opinion in history. It is included in all Random House printings of the novel.

The opinion of the Court has long been recognized as a perceptive analysis of Joyce's work.