Is he beloved by his critics and peers? Not so much. But James Patterson's popularity among readers remains incontrovertible. He is an industry. It's not so much all that he has written. "Written" isn't a precise enough verb. Maybe conceived, outlined, or curated would be more descriptive of his process. 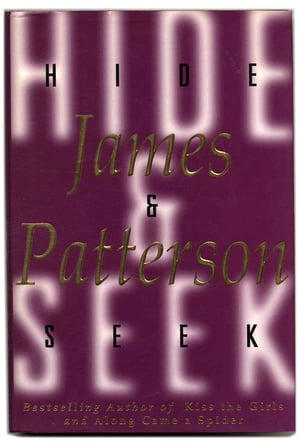 James Patterson grew up just a few miles up the Hudson River from his current home. His father was an emotionally withholding man whose own father had abandoned his family and James grew up in the local poorhouse. Patterson says he grew up feeling like he had to be the first in his class kind of kid and was very serious. He grew up telling himself stories. He had not focused on being a writer. He says he was just in the habit of telling stories.

He worked hard in high school and applied to top schools, only to learn his high school never sent in the applications. He attended Manhattan College in the Bronx. He was enrolled in Vanderbilt's PhD English program but quit when he got a high draft number. According to an article in Vanity Fair, he went to work as a junior copywriter at J. Walter Thompson and was successful there.

As he rose to eventually become the CEO for North America he made it his policy to never hire anyone he wouldn't like working with. He found sessions with female copywriters were more collaborative.

Patterson and Co-Authorship: A Team Effort

He delivers exhaustive notes and outlines that can run to 80 pages to his co-authors. The way the process usually works is that Patterson writes that detailed outline, and a co-author then drafts chapters. Patterson reads the draft, does revisions, and rewrites as necessary. Over time the number of rewrites goes down for each new collaborator. These co-authors are paid by Patterson.

The relationship between Patterson and his publisher, Little, Brown & Co., a division of the Hachette Book Group, is unconventional. He has two editors, three additional full-time Hachette employees and their assistants devoted to him; a brand manager who moves Patterson's adult books through the production process, a marketing director for the young adult titles, and an overall sales manager.

Patterson remains intimately involved in the publication of his books. He handles all of his advertising and monitors every other step of the publication process, from jacket design to the timing of book releases to placement in retail stores.

To maintain the pace of production, Patterson now uses co-authors on nearly all his books. He functions in part as an executive producer and in part as a head writer. It's his vision that is set out for each book or series. Then he ensures that his writers stick to what he’s set out. This kind of collaboration is found in advertising agencies or the writing rooms of television shows. But books have traditionally been the product of one person's sensibility and imagination rendered in a singular style and voice.

As Independent describes, there is a field called stylometry that uses digital methods to test to what extent someone actively contributes to the actual words of a text. It has been used in author attribution studies involving popular writers like Harper Lee and J.K. Rowling. These studies showed that in each of the collaborative novels tested the dominant style is that of the co-author.

This presents quantitative evidence that Patterson's contributions are more about plot than style. Patterson has consistently given the impression that he's more about the plot. It does confirm that the world's bestselling author does not appear to be principally a writer. He has commodified storytelling. Perhaps calling him an author, in the widely accepted sense of that word may not always be the most appropriate term for his role in the writing process used in the books with his name on their covers.

His work has been compared to that of a TV showrunner who sets a series in motion and guides the tone and pace, no matter who might write individual episodes.

The formula Patterson uses for the books that have made him the planet's best-selling author since 2001 is pretty simple. All the action is sketched out in detail in the outlines he sends to the co-authors. There are a lot of periods in each paragraph and a lot of paragraphs on every page. There are very few pages per chapter. Every chapter starts with a quick reminder of who was in the prior chapter and what transpired. It is not taken as an insult to say often the prose is pretty bad.

In more recent years, Patterson has devoted his time and money to promoting literacy and supporting local bookstores. He has launched a national campaign to promote reading. He has contributed millions of dollars to his and his wife's alma maters, and given additional millions in scholarships at dozens of colleges and universities. As Vanity Fair states, he has sent hundreds of thousands of books to troops and given countless books to public schools across the country.

Patterson intends that about half his wealth will go to charity and has hopes his son will take charge of the giving. His philanthropy is hands-on since he thinks institutions frequently are sloppy.

Patterson decided a while back that he'd rather be a successful popular novelist than a mediocre literary one. He is philosophical about the critics of his craft. He says he considers himself, above all else, to be an entertainer.

He has succeeded. Whether you believe him to be a writer or a brand manager, he has provided an immense number of people with lots of reading entertainment. If that's a brand, then it works, people recognize it and want more of it. Hard to really find fault with any of it.