James Thurber became one of the most popular humorists of his time by shining a comedic light on the everyday man and his daily, mundane frustrations and idiosyncrasies. In his work, Thurber often asked his audience to consider how their minds shaped their view of reality. 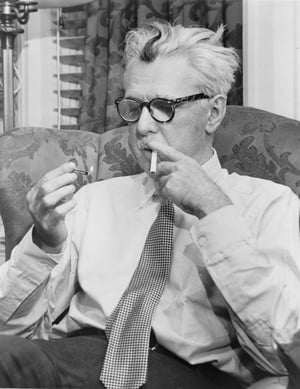 He is best remembered as an American cartoonist, author, humorist, journalist, playwright, children's book author, and for his celebrated wit.

James Thurber was born to Charles and Mary Agnes Thurber in Columbus, Ohio on December 8, 1894. Charles worked primarily as an aide for Ohio politicians and was clever with words. According to an article in Humanities, He had a talent for solving newspaper puzzles. His mother, known as Mame, loved telling stories and staging practical jokes. She once went to a faith healer's revival pretending to be paralyzed and confined to a wheelchair. She then proceeded to jump up and howl hosannas, declaring herself cured.

Thurber's one-of-a-kind grandfather was another formative influence. William Fisher became a star of Thurber's childhood narrative, My Life and Hard Times. The book is hilarious, yet its humor comes from comic monologues that build through plots and not from one-liners. Odd domestic happenings become convulsive comedy in the style of Garrison Keillor and David Sedaris. The effect of how a small mishap can turn into total disarray as misunderstandings pile up like a gaggle of Keystone Kops builds throughout the retelling of the entire story. You have to read the entire story to fully grasp the absurdity.

His coworker and friend E.B. White described Thurber's mind as a clutter of domestic objects bouncing and banging downhill toward chaos. This terrified Thurber. His mind was always restless and made him uncomfortable. His thoughts were always a tangle of baseball scores, Henry James, Civil War tactics, terrier puppies, personal maladjustments, ancient myths, and modern apprehensions. Through this jungle stalked the ghosts of his relatives in Columbus, Ohio. In nearly all his work Thurber made fun of the frustrations and terrors that often strike in the dreams of us all.

In his work The Clocks of Columbus, The Literary Career of James Thurber, Charles S. Holmes shows the forces that forged Thurber's imagination as well as the times and places that furnished it. This book is not definitive but unless or until someone with as much modesty and good sense as Holmes comes along to write an even fuller biography of Thurber, this is the best book about a writer who managed to get pretty far under the surface of his American world.

It has been posited that Thurber's extraordinary imagination arose from a neurological condition that causes complex visual hallucinations in people who have had some level of visual loss. Thurber lost one eye as a child when one of his brothers shot him with an arrow while playing William Tell. He eventually became virtually blind.

His eyesight prevented him from active pursuits and because he could not complete a mandatory ROTC course, he never graduated from college. He did attend Ohio State University from 1913 to 1918.

He proceeded to work as a code clerk for the Department of State in Washington, D.C. and in Paris. He did this from 1918 to 1920. He returned to Columbus and began his writing career working as a reporter for The Columbus Dispatch from 1921 to 1924.

After moving to New York and getting a job as a reporter for the New York Evening Post in 1925, Thurber joined The New Yorker in 1927. His career as a cartoonist began in 1930 when his friend and fellow New Yorker contributor E.B. White found some of his drawings in the trash and submitted them for publication.

Thurber was quite successful late in life. He published at least 14 more books. In addition to the humorous fictional memoirs of his life he also wrote darker material that included murder and marital disfunction.

Thurber also wrote over 75 fables. These short stories featured anthropomorphic animals and ended with a moral as a tagline. The fables were satirical and the morals served both as punchlines and as advice to the reader.

Between 1947 and 1948 he wrote a five-part series examining the radio soap opera phenomenon. He left no element of these programs unexamined, including their writers, producers, performers, sponsors, and listeners. This was one of the first series to examine a pop-culture phenomenon in such depth.

Thurber's cartoons became as noted as his writings. They possessed a wobbly, eerie, feel that seemed to mirror his idiosyncratic view of life. He wrote that people said it looked as if he drew them underwater.

In his last year, Thurber's behavior became erratic and unpredictable, and he suffered a blood clot on the brain on October 4, 1961. His emergency surgery was initially seen as successful, but he died a few weeks later from complications of pneumonia. According to his wife, his last words were "God," and "God bless" followed by "God damn."

E.B. White offered what may just be the best summation of Thurber's legacy. He said, after Thurber's death, that "the whole world knew what a funny man he was but that you had to sit next to him day after day to understand the extravagance of his clowning, the wildness and subtlety of his thinking, and the intensity of his interest in others and his sympathy for their dilemmas. Dilemmas that he instantly enlarged...just as he enlarged and made immortal the strange goings-on in the Ohio home of his childhood."