James Whitcomb Riley entered the world carrying that rather weighty moniker along with him in 1849 in Greenfield, Indiana. He was a middle child of six born to Reuben and Elizabeth Riley, and was named after the then governor of the state. Despite the eighteen letters that his parents bestowed upon him at birth, James spent his young life trying to make a name for himself. After a failed attempt at law school, Riley worked as a house painter, Bible salesman, and sign painter. He later signed on with a traveling show where he entertained crowds with music and verse before selling them tonics. He once made the erroneous claim that he himself had been cured of blindness by using one of those same tonics. Traveling the Indiana countryside and selling his snake oil as the “Painter Poet” solidified his reputation as a Hoosier and a huckster. 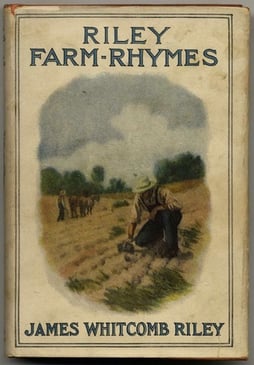 Riley's next career move was to start an advertising business with some friends. His blank pages were billboard-sized and were read by passers-by on the sides of tall buildings and barns. During all this time, Riley continued to be drawn to poetry and submitted several poems for publication under the pseudonym Jay Whit — a name he literally made for himself, and a less cumbersome one at that. The poems were published in the Indianapolis Mirror. He received no pay. He did, however, receive a readership and the honor of being printed on the front page.

Although his career path continued to be a meandering one with additional stints as a painter and huckster, he eventually made his living publishing and performing his poetry.

Looking at his biography, it is easy to see how James Whitcomb Riley became known as the Hoosier Poet. He was born and raised in a small town in Indiana. He traveled his state’s wide expanse of farms and fields, painting signs and selling. When it came time to find an audience, Riley published, but he also took his poetry to the people of the Midwest as he toured and performed readings. Instead of clamoring to be accepted by the elite East coast writers, he embraced his Midwest roots and spoke to the audiences that stood before him and stood behind him as a writer. This approach led him, eventually, to be welcomed on the East coast tours and be well received by audiences there as well.

The land beneath his feet and the voices in his ear during his childhood became the template for his verse. His poetry speaks in simple language of a simpler time; it speaks in common phrases of the common experiences of childhood, and it speaks in musical rhymes of the rhythm of the seasons and of children’s play. We see the rhythm of the seasons in his book Riley Farm-Rhymes in such poems as “Kneedeep in June,” “September Dark,” “When the Frost is on the Punkin,” and “Old October.”

The Midwest landscape, specifically its farmscape, is the setting of another poem from that collection called “Where the Children Used to Play.”  It is a nostalgic glance back as:

“. . . hand in hand we wander/Down the old path winding yonder/To the orchard where the /Children used to play.”*

Such nostalgia for the presence and play of children on the landscape of one’s life is only possible if one can still hear in the heart and speak with the tongue the musical rhythms of childhood. James Whitcomb Riley inscribed one of his most famous children’s poems, “Little Orphant Annie” with the following dedication:

To all the little children: -- The happy ones; and sad ones;
The sober and the silent ones; the boisterous and glad ones;
The good ones -- Yes, the good ones, too; and all the lovely bad ones. 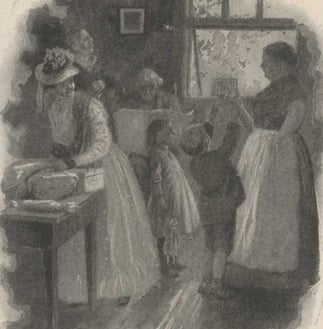 Whether happy, sad, boisterous or glad, James Whitcomb Riley reflects, in his poetry, the innocence of all children. They desire to be, like “The Raggedy Man,” “the goodest man, ever you saw.” They giggle at the “Ringlety-jing” of the “Nonsense Rhyme,” and in “Fire at Night,” they wonder at the sound of the horse-drawn fire engine passing by.

James Whitcomb Riley has a clear mid-western voice which speaks to the simplicity of rural life, extols the virtues of good living, and celebrates the innocence and wonder of childhood. His poems are a timeless treat for the young at story time, and a nostalgic trip to a simpler time for the storyteller who is young at heart. In the end, maybe this Hoosier isn’t a huckster at all. Maybe he truly does sell us a tonic to cure our blindness. He helps us to see clearly the simple charms of children at play in the changing seasons of the Midwestern landscape.