Jan Brett decided she would be an illustrator when she was quite young. As a child, she felt that she could enter the pages of her beautiful picture books. Her goal as an illustrator is to recreate that feeling of believing that the imaginary places really exist. Her beautiful pictures allow children and the adults who love them to experience this magic in the 41 million copies of her books in print. She is both an author and illustrator, but it’s her illustrations that truly set her books apart from other players in the world of children’s literature. 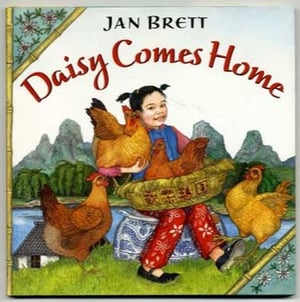 Jan Brett has traveled widely and most of her travel mixes pleasure with serious research. She brings home books and artifacts which are meticulously replicated (and often imaginatively repurposed) in her illustrations. She wants those reading her books to feel like they could just walk into the scene and know what it feels like and smells like. It's about making a fantasy place feel like it’s real.

Here is an abbreviated list and description of some of her books published between 1980 and 2019. The year noted is the earliest publication date for that particular book; there have been numerous editions published over the decades of her popularity.

Fritz and the Beautiful Horses (1981)

Fritz was not beautiful. He couldn't prance like the elegant horses that carried the lords and ladies to the city. A city that only allowed the most beautiful horses within its walls. The citizens laughed at Fritz. But he was dependable and hard-working. He proves to all the citizens that there are things more important than external beauty when he rescues the children of the city and becomes a real hero.

Nicki's grandmother knits him pure white mittens that she is afraid he will lose in the snow, and he does exactly that. When he drops the mitten, some animals move into its snug wool interior. First, a mole moves in, then a rabbit, a hedgehog, an owl, a badger, a fox, a bear, and finally a mouse. The mouse makes the bear sneeze and that dislodges all the animals. Nicki finds his mitten and takes it home and his grandmother is left to wonder how it got so stretched out.

The magnificent paintings feature Brett's usual array of folk details as well as intricate knitting designs, ornate embroidery, birch bark borders and the intricate patterns in the grandmother's home. The book welcomes all readers to suspend belief and enter into this tale from Ukraine.

Lisa's woolen stocking flies off the clothesline and Hedgie the hedgehog finds it and pokes his nose in. He attempts to pull his nose out but the stocking gets stuck on his prickles. First, a mother hen comes by, then a noisy goose, a talkative barn cat, a pony, a playful farm dog, and a mama pig with her piglets. They all laugh at Hedgie, and he pretends he's wearing a new hat. Meanwhile, Lisa is in Brett's borders getting ready for winter. Then she realizes her stocking is missing and she enters the story to look for it.

Here the setting is a Costa Rican cloud forest. Carlos drops his umbrella to climb a tree for a better view of the animals and they all cram into the banana leaf umbrella as it floats by. There is a little tree frog, a baby tapir, a big jaguar, and more. They run out of space and not even a hummingbird can fit into the space that's left. So the umbrella overturns and everyone falls out. Like The Mitten and The Hat, this tale of escalation will have every reader looking for the world of details Brett always includes.

Once again Brett lavishes her attention on the delights and eccentricities of the natural world. the story centers on Mossy, a turtle who lives in a habitat next to a pond and has moss, ferns, and wildflowers growing out of her shell. A museum curator moves Mossy indoors to live in a viewing pavilion with everything they thought a turtle would need. But Mossy misses her outdoor home and a turtle named Scoot she recently met. A portrait of Mossy immortalizes her in the museum and she is returned to the wild. Brett's trademark details fill the illustrations, and she include some visual surprises for readers to uncover.

Hedgie is back and determined not to hibernate and miss another winter. The hens, geese, sheep, billy goat, pig, and horse each bid him a good sleep and promise to share stories of their winter fun when he awakens in the spring. He does not want to miss the fun and stays out in the cold in hopes of staying awake. Fortunately, a young child finds him dozing and brings him indoors to snuggle near a window where he can be warm and watch all the activities. Once he falls soundly asleep he is put back into his burrow outside. The other animals decide observing winter from a warm house makes great good sense. The page border illustrations reflect both previous and upcoming action.

This is a reimagining of a classic Middle Eastern folk tale that features a poor tiger cub who is a very hard worker. His mother provides slippers to protect his feet, and they allowed him to prosper. He eventually becomes very wealthy. He continues to wear the slippers until somebody asks why such a prominent person would wear such worn shoes. Tiger is embarrassed and he tries to get rid of the slippers, but fate continuously brings them back. He sends them to his uncle who weeps with pride when he sees the slippers his sister made and his nephew used to accomplish so much. He sets off to visit and brings the slippers along. Tiger's cub suggests he honor the slippers by erecting a special place for them so as to remind him of how far he's come.

Jan Brett's work is simply amazing. The illustrations are beautiful and packed full of detail. There is an almost endless amount of information contained in the page borders, and the books have a wonderful ability to allow everyone to experience the magical places. The authenticity of the costumes and settings present more information for the readers and inspire their own imaginings. And the wise words that appear in her retelling of timeless tales are for every audience member, regardless of age.