Jean-Paul Sartre: A Man of Being

Jean-Paul Sartre was a French philosopher, playwright, novelist, and political activist. Born on June 21, 1905, he was a man of many talents, many of which you may be aware of. However, as an exceedingly diverse character there are probably many interesting things you don’t know! 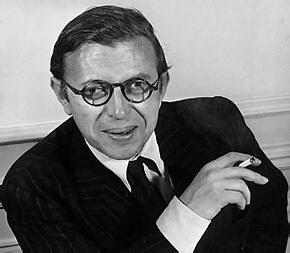 1. Sartre was the first person to turn down the Nobel Prize for literature.

Sartre felt that it would be too large of a burden to bear and that the principles for which he was awarded the Nobel Prize did not belong to him alone.

2. Sartre was involved in an open relationship with Simone de Beauvoir.

Sartre and de Beauvoir met in 1929 in Paris and immediately began a lifelong relationship filled with countless affairs and a certainly unconventional relationship. His fantastically romantic nickname for her was “the Beaver.”

3. Sartre spent time as a prisoner of war.

During World War II, Sartre worked as a meteorologist for the French Army. He was captured by German troops in Padouz and was a prisoner of war for nine months.

4. After his release, Sartre became an active member of the Resistance.

After securing his release from the Germans, Sartre returned to France to teach and work with the French Resistance throughout the remainder of the war in an effort to help remove the German occupying force. It was during this time period that he wrote his first major work in philosophy Being and Nothingness: An Essay in Phenomenological Ontology.

5. Sartre was a rather avid drug user.

Sartre made particular use of amphetamines to help him get through his stressful and busy lifestyle.  At one point his use of mescaline actually left him thinking he was being chased by a lobster!

6. Sartre was a mentor and friend of Albert Camus.

The two authors were friendly rivals for many years, in fact sharing girlfriends. However beginning around the year 1952, Sartre and Camus began a famous falling out that would last for the remainder of their lives. This falling out began over ideological issues relating to the cold war.

7. Sartre was instrumental in the affair of Camus and his favorite girlfriend.

Sartre officially never wavered from his long standing love of de Beauvoir. But he was well known for his dalliances with other women. One woman drew his eye perhaps more than the others: “Wanda.”  Sarte courted her with utter abandon until she gave into him and his will.  He told her he loved her, offered to marry her when she was ill (though he told “The Beaver” that is was purely symbolic), and even dedicated the Roads to Freedom Trilogy to her.   However, Sartre created his own problem when he cast her in his play No Exit alongside Camus.  Camus, also a notorious ladies' man, took full advantage of the script in which all of the characters got together and discussed how great it would be to have sex if they weren’t all dead.  So for several years Sartre and Camus were involved in the rather odd situation of sharing a girlfriend.

When Sartre died of a pulmonary edema in 1980, he was such a significant cultural figure that more than 20,000 people attended his funeral at the Montparnasse Cemetery.