Today we celebrate the life of the English poet John Keats. Keats was born on October 31, 1795 in London, England and died a very short 25 years later in Rome, Italy of tuberculosis. With such a short life, most would assume that he could not have produced much, if anything, of worth. Yet Keats is perhaps one of the most well known of the English Romantic Poets. Through his poetry he sought the perfection of poetry filled with vivid imagery that expressed philosophy through classic, often Greek, legend.

Keats was the eldest of four children born to Thomas and Frances Keats. He lost both his parents as a young boy. In 1803, his father, a livery stable keeper, was killed after being trampled by a horse. His mother died in 1810 of tuberculosis after a series of familial failures where she squandered family fortunes through marriage and left her children in the care of their grandmother. These tragedies helped Keats better understand that the human condition is one of both beauty and pain. School, particularly his art and literature studies, were comforts to the young Keats.

After his mother’s death, family friend Richard Abbey was appointed to control the family finances. Under Abbey’s guidance, Keats left school at the Enfield Academyin the fall of 1810 to study medicine at a London hospital, eventually becoming a licensed apothecary in 1816.

But medicine was never the career that Keats had in mind. While studying he pursued connections with Leigh Hunt, the publisher of The Examiner. Hunt was an early supporter of Keats' poetry and became his publisher. Through Hunt, Keats became a part of a group of young poets which included Percy Bysshe Shelley and William Wordsworth. By 1817, Keats began publishing his works.

Many of Keats' poems received scathing reviews at the time of publication. One critic even called his epic poem Endymion imperturbable driveling idiocy.” Keats' response to this criticism of his work was to create a doctrine known as Negative Capability, which is essentially the belief that humans are capable of transcending intellectual or social constraints and may far exceed, creatively or intellectually, what human nature is thought to allow. 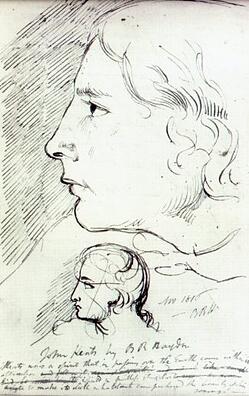 In 1819, Keats contracted tuberculosis. As his health quickly deteriorated, he retreated to the warmer climates of Italy at the behest of his doctor. Following years of strict diets and heavy bloodletting, he died February 23, 1821. He had requested burial under an unmarked headstone, but this wish wasn't respected. Leigh Hunt blamed Keats' untimely death on the scathing review of Endymion, a suggestion that Lord Byron would later satirize in Don Juan.

Though Keats' life was cut incredibly short, he still left an incredible legacy in literature. Keats' poems are among the most widely studied in the world. Jorge Luis Borges has even noted that his first encounter with Keats was the most signfiicant moment his literary life.