In 1940, John Steinbeck undertook a fishing boat journey around the Gulf of California to collect marine specimens. That, in itself, is not so unusual. Afterall, Vladimir Nabokov worked as a lepidopterist and has several species of butterfly named after him. Indeed, many authors have dabbled in science. Somewhat more unusual, however, is that the journey led to a published collaboration between Steinbeck and famed marine biologist, Ed Ricketts.

The book in question, 1941’s Sea of Cortez: A Leisurely Journal of Travel and Research, was a mix of marine taxonomies, ship logs, and Ricketts’ journal entries. These were imbued with some of Steinbeck’s most reliable themes, from the interconnectedness of all organisms to the tenuous nature of "home."

Steinbeck’s expectation that the book’s sales would pay for the journey was, perhaps, unreasonable. It was released to a mild critical response and ultimately failed to find much of an audience, but it yielded tantalizing fruits all the same. Most consider Sea of Cortez to be one of Steinbeck’s most important pieces of nonfiction, and the journey provided the inspiration for The Pearl (1947), one of the author’s most beloved works. For Ricketts’ part, the book represented not just a furthering of his scientific research, but his first foray into philosophy - thanks to the volume’s inclusion of his seminal essay on non-teleological thinking.

Beyond being a wellspring of inspiration for both writers, Sea of Cortez was a defining moment in a friendship that would prove hugely significant for both men. After meeting in Pacific Grove, California in late 1930, Steinbeck and Ricketts took an immediate shine to one another. Ricketts’ lab became somewhat of second home to the author and his wife. It was a place not just of scientific and philosophical discussion, but of much needed companionship. 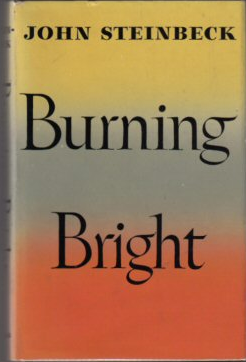 So impactful was Ricketts’ presence on Steinbeck, that the author immortalized his friend in the form of some of his oeuvre’s most memorable characters. Ricketts was the explicit inspiration for Doc in 1945’s Cannery Row, Friend Ed in 1950’s Burning Bright, and, perhaps most crucially, Jim Casy in Steinbeck’s masterwork The Grapes of Wrath (1939). Far from a one-sided friendship, these portrayals catapulted Ricketts to an unlikely fame, and brought his philosophical thoughts on poetry and teleology to a wider audience than would have been otherwise possible.

While the correlation between Ricketts’ friendship and his omnipresence in Steinbeck’s later work is undeniable, it seems noteworthy that the bulk of the novels portraying Ricketts correspond to a period of decline in Steinbeck’s writing. The exact moment when the era of Steinbeck and Ricketts’ close friendship came to a close is not entirely clear (anything from Steinbeck’s moving away from Pacific Grove in 1941 to Ricketts’ untimely death in 1948 seems possible) but it is generally agreed to mark the moment when Steinbeck’s prowess as a writer began to weaken.

Crucially, then, of the novels depicting Ricketts, only The Grapes of Wrath was produced outside that period of decline. It seems striking that the end of a friendship would produce such a marked uptick in one friend’s appearances in the others’ work. If Steinbeck had sworn off Ricketts’ friendship and philosophy, what did Steinbeck mean by including him in so many of his later writings? While conventional wisdom holds that Steinbeck’s writing slipped when his friendship with Ed Ricketts came to an end, it may not have been due to a wane in Ricketts’ influence, but rather a desperate desire on Steinbeck’s part to get that influence back.