John Updike: From Rabbits to Religion

John Updike is proof that quality doesn’t have to be sacrificed for quantity. This highly accomplished author averaged at least one book a year during his career, while also composing poetry, short stories, and essays. He is one of three fiction authors to win more than one Pulitzer Prize.  Both novels to receive the prize were a part of his famous Harry “Rabbit” Angstrom series. 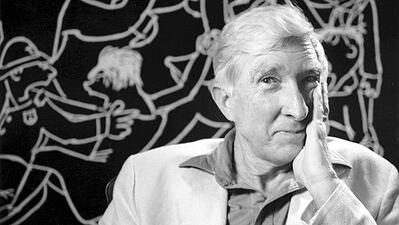 Seeds of Inspiration in Academic Excellence

After the conclusion of his education, Updike moved to New York and landed a job at The New Yorker. He wrote the "Talk of the Town" column, and he often contributed short stories and poems for the publication.

Religious and philosophical themes often appear in Updike’s work. He was raised as a Christian, but experienced a crisis of faith early in his career. During this time he began to independently study philosophy and theology, especially the work of Karl Barth and Søren Kierkegaard. Despite his doubts, Updike returned to his faith wholeheartedly and remained an active Christian for the rest of his life.

After a decade of writing essays, poems, and short stories, Updike began work on Rabbit, Run, the first novel in his famous series that spans the life of Harry “Rabbit” Angstrom from his mid-twenties to his final days. These works earned him two Pulitzer Prizes, along with a spot on Time’s All-TIME Greatest Novels.

Updike’s Rabbit series, along with his other beginning novels, tended to explore life in a small town from the perspective of middle-class characters.  He embraced realism, often focusing on the mundane and putting his characters through many hardships with their family, spouses, or social circles.

As Updike’s career progressed, his writing became more unpredictable. He began exploring new genres, including historical fiction, mystical realism, science fiction, and experimental fiction. While these novels had little in common, they all continued to reflect Updike’s religious faith.

When he died in in 2009, Updike was working on a book about early Christianity and the life of Paul. He had published over thirty novels, along with several collections of poetry, short stories, and essays.