J.R.R. Tolkien's Epic Quest: Writing The Lord of the Rings

Despite plenty of naysayers and literary critics, the English-reading world consistently votes J.R.R. Tolkien’s The Lord of the Rings as one of the greatest books of the 20th Century.  In 1997, a poll performed by the British bookseller Waterstones voted Tolkien’s epic fantasy as the overall winner – and that was four years before Peter Jackson’s movie adaptations hit the big screen!  Our fascination with Middle Earth, the One Ring, and hobbits seems to have no end.  Today, we salute Tolkien for his epic accomplishment: writing The Lord of the Rings. 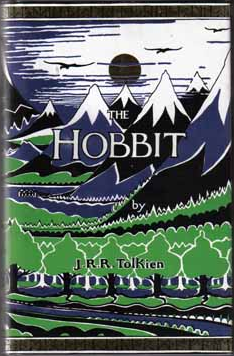 By the end of 1937, Tolkien’s children's book, The Hobbit, had become a definite success.  His publisher at Allen & Unwin wrote to Tolkien asking for a sequel, but all that Tolkien had prepared were parts of what would become The Silmarillion and some unrelated short stories for children.  Stanley Unwin politely rejected both, but pushed again for another book with hobbits.  Unfortunately, the conclusion of The Hobbit made it clear that Bilbo’s adventures were done, and besides, Tolkien was ready to move on.

However, on December 19th, 1937, Tolkien wrote that he had composed the first chapter, “A Long-expected Party.”  His first draft, however, bears little resemblance to the epic it became.  From Tolkien’s notes and papers, we know that the story of the One Ring took a while to uncover.  The Ring pushed itself to the forefront as the one unsolved mystery of The Hobbit, causing Tolkien to write in his notes: “The Ring: whence its origin? Necromancer? Not very dangerous, when used for good purpose. But it exacts its penalty. You must either lose it, or yourself.”

Tolkien would go through many edits and rewrites over the next twelve years, putting the book down for some time, then working feverishly through chapters at a time.  During most of his writing process, England was embroiled in World War II.  The Lord of the Rings was written with a backdrop of war, yet one of the most significant ramifications for Tolkien was the ration of paper.  He wrote in the empty spaces of student exams and charted a Middle Earth lunar cycle on an air raid watch card.  Tolkien was utterly committed to consistency in what he would call his “sub-creation” – what fantasy authors now refer to as “world-building.”  As his story grew in both complexity and length, so did his notes and papers.  At some point, Tolkien wrote to Unwin to admit that this sequel to The Hobbit was turning out much longer, more alarming, and “in fact not really a ‘juvenile’ at all.” 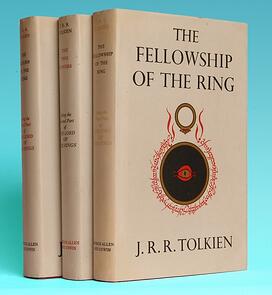 Finally, in 1949, Tolkien’s manuscript was sent off to his publisher.  He was a master craftsman, though, and never quite satisfied with his work.  Even in final edits, Tolkien would make corrections within the confines of the typesetting.  Due to some waffling about publication, The Fellowship of the Ring was not printed until July 1954, and The Two Towers followed in November.  Tolkien missed his deadline for the third volume, reworking the material in the appendices, and readers had to wait until October 1955 to learn the fate of their beloved Middle Earth.

While it’s tempting to believe that Tolkien held the complete story in his mind from its inception, it’s also comforting to know that one of the greatest fantasy writers of all time had to muddle about to create his masterpiece.  Like many artists, he did not see the job of the author as creating from scratch, but instead as uncovering the story that should be told: “I have long ceased to invent… I wait till I seem to know what really happened.  Or till it writes itself.”

From all of us to Tolkien: thank you for "letting" The Lord of the Rings be written.  Cheers!