In 1962, the Heinemann African Writers Series (AWS) began with Chinua Achebe’s novel Things Fall Apart (1958) as the first book in the series. The AWS has become synonymous, in many ways, with the global circulation of African literature in the second half of the twentieth century. Do you know how it started and why it’s significant? And perhaps more pressingly, would you like some recommendations for books to seek out from the AWS? We’d like to tell you more about the Heinemann series and to mention some of our favorite books from it that you might add to your collection. 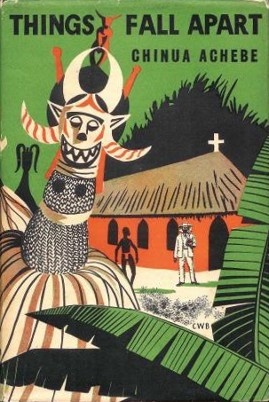 Chinua Achebe was the founding editor of the series and remained in his editorial position until 1972. At that point, the AWS had published 100 different texts, and it would go on to publish hundreds more. In large part, the books with the AWS imprint were Anglophone African texts—those written in English within African nations with connections to the British Commonwealth through imperialism and colonization. At the same time, as the series moved forward, it did publish a number of books in translation from nations within the African continent written in colonial languages (such as French, Portuguese, and Afrikaans), as well as in indigenous African languages (like Zulu, Swahili, Sesotho, and Luganda).

Introducing Yourself to the Heinemann African Writers Series

As Mpe observes, developing a literary series devoted to literature from a continent can have its limitations. At the same time, the AWS has made it possible for numerous readers across the globe to access great novels of the twentieth century. If you’re not yet familiar with the AWS, we have just a few suggestions of some of our favorites to get you started.

If you haven’t yet reach Chinua Achebe’s Things Fall Apart, this is a great place to start given that it was the first book in the series. We also love the literary (and cinematic) work of Ousmane Sembène. We recommend Tribal Scars (1962). Moving from texts produced in West Africa to the other side of the continent, we also highly recommend Ngũgĩ wa Thiong'o’s A Grain of Wheat (1967), published when the writer from Kenya still used the colonial name James Ngugi. Moving to literature connected to Southern Africa, we have two final suggestions for you: Alex La Guma’s A Walk in the Night and Other Stories (1968), which addresses the violence and complexity of apartheid politics in South Africa, and Bessie Head’s The Collector of Treasures (1977), written by the author while she was living in exile from South Africa in Serowe, Botswana.

Many of the texts from the Heinemann AWS we mentioned have been republished by university presses, but you may be able to find some first editions if you’re hoping to expand your collection.