Lewis Carroll: A Man of Many Talents

Perhaps best known as the author of Alice's Adventures in Wonderland, the man born as Charles Lutwidge Dodgson and known as Lewis Carroll was truly a Renaissance man of the Victorian era. 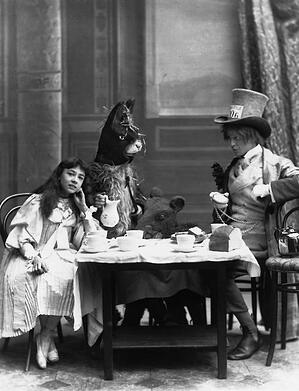 Not only was he the author of some of the best examples of nonsense literature (Alice and Through the Looking Glass) he was also an accomplished mathematician, poet, satirist, philosopher, inventor, and photographer.

Health was never a strong point for the young Dodgson. Having developed a stutter at a young age, he was not deterred, ultimately making it part of his personal story as an adult. The claim was made, although there was no confirming evidence, that he only stuttered around adults, never children. He was left deaf in one ear after a childhood fever, and whooping cough at 17 is said to have weakened his chest for the rest of his life. He eventually developed debilitating, aura-hallucinating migraines and was diagnosed with epilepsy.

Academics were a similar story. Dodgson never worked hard at his studies but finished at the top of his class anyway. He was a master logician and wrote around a dozen books of academic topics that ranged from mathematical methods and logic, to the theory of elections.

For the most part, he was a conservative mathematician who lived and worked at a time when that discipline was changing dramatically. The case has been made that Alice's adventures parodied a then-new conceptual math that featured imaginary numbers and quaternions, which Dodgson scoffed at. It is suggested the overall absurdity of Wonderland was meant to match the absurdity of the conventional Dodgson saw emerging in mathematics overall.

The rest of his academic career moved between high octane promise and distractions that he found irresistible. As a result of admitted academic laziness, he failed at scholarship but his brilliance as a mathematician won him a Christ Church Mathematical Lectureship, which he held for 26 years.

The income was good; however, the work bored him. By his description, many of his pupils were stupid, older than him, richer than him, and mostly uninterested. He didn't want to teach them and they didn't want to be taught. Apathy ruled on both sides. 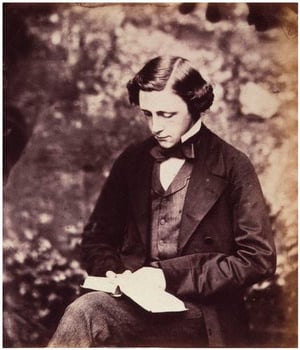 He took up the new art form of photography in the 1850s. He excelled at it. Photography became an expression of his personal inner philosophy, a belief in the divinity of what he called beauty. His use of the word beauty referred to a state of moral, aesthetic, or physical perfection.

For over 20 years, beginning in his mid-20s, Dodgson created more than 3,000 photographic images. He produced portraits, landscapes, and stills (of subjects such as skeletons, dolls, statues, and paintings). Most of his images have been lost and as he aged he moved on to other interests rather than keeping up with the developments in the field of photography.

Dodgson was ordained as a deacon in his church but petitioned to avoid becoming a priest. A variety of reasons have been posited as an explanation for this, among them a love of theater, only a tepid interest in the Anglican church, and a burgeoning interest in alternative religions.

With the launch and phenomenal success of Alice, Dodgson/Carroll's life story is effectively divided into two. There was Dodgson's real life and the evolving myth of Lewis Carroll.

Carroll became a detailed alter ego, a person as famous and embedded in the popular psyche as the story he told. This alter ego encompassed a large part of the image of little girls and strange other-worldliness attributed to the author of Alice, while Dodgson's reality remained mostly obscure, being ignored even by recent and reputed biographers except for as the occasional footnote.

While he became richer and more famous, Dodgson continued to teach at Christ Church, and he remained in residence there until he died. He continued to publish mathematical papers, court scandal through his various associations with females, and tour Russia and Europe. He eventually bought a house in Guildford, where he died of pneumonia.

Perhaps the most beloved facet of Dodgson/Carroll is his work in the genre of literary nonsense. This includes the books Alice in Wonderland and its sequel, Through the Looking Glass, and the poems The Hunting of the Snark and Jabberwocky. He created masterful fantasy and was acclaimed for his skills at wordplay and logic.

By far the best known of Carroll's work is the book most commonly referred to as Alice in Wonderland. In brief, it is the story of a young girl who falls down a rabbit hole and makes her way through a strange, surreal world where nothing exactly makes sense. This world exists in a  state where rules are not yet known and imagination is as potent as reality.

Nonsense literature rose to prominence in Victorian England, where books were starting to be of growing importance in the experience of growing up. To overgeneralize, nonsense literature presents language and situations that are just not normal. Carroll's characters often show no respect for the basic rules of language. Humpty Dumpty summarizes this when he says to Alice, "When I use a word it means just what I choose it to."

It's more than language that is played with, though. The very laws of physics are turned on their head. Alice and the Red Queen are running as fast as they can and Alice asks where they're running to. The Red Queen explains that they're running merely to stay in place. Alice asks how they might actually get somewhere and the Red Queen explains they'd have to run twice as fast. Since they are running full out, this makes no sense. The Mad Hatter explains, at the tea party, that his watch is exactly two days slow. Which means it's telling the right time.

Although what's cited as nonsense can be seen as nothing more than childish fantasy, there is more to Carroll's nonsense than simply its non-sense. Many of his seemingly childish ideas draw on complex ideas of the nature of language, truth, and logic. There are political aspects to his nonsense. In the story of the Walrus and the Carpenter there is a lot of nonsense spoken to override the protests of the oysters they are trying to eat. Here nonsense is a tool used by the powerful to bewilder and exploit the weak and helpless.

Although Alice in Wonderland is originally a children's story, its meaning, especially the use of nonsense, goes beyond that audience. The nonsense is key to its success with adults for over a century. The reader can shake off the rules and shapes of everyday life and return to the unlimited and baffling visions of their childhood.