Andrew Carnegie left his name on a lot of American landmarks—Carnegie Hall and Carnegie Mellon University, for example—but perhaps no other philanthropic mission did quite so much good for so many as the libraries he funded. Carnegie believed in helping those who helped themselves, so the public library, where people of all walks of life came seeking knowledge, greatly appealed to him. The first Carnegie library built in the United States became a National Historic Landmark in 2012, and there are hundreds still in use. 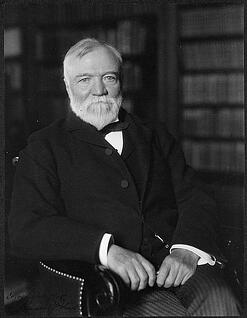 Carnegie’s life story is the epitome of the American dream. He immigrated to America with his parents from Scotland in 1848 when he was still a boy. Carnegie was hard-working, smart, and lucky. The boy who started as a telegraph messenger boy would become one of the wealthiest men in railroads and steel. He was eager to learn, so when Colonel James Anderson invited working boys to use his personal library on Saturdays, Carnegie jumped at the opportunity. Once he entered the business of railroads, Carnegie proved invaluable during the Civil War. Then he built his wealth with smart investments. He sold his Carnegie Steel Company to J. P. Morgan in 1901 for $480 million and retired to become a philanthropist. By his death in 1919, Carnegie had given away almost 90% of his fortune to charity.

The mission to fund the construction of libraries came from his experience in Colonel Anderson’s library. If other immigrants had the same opportunity, could they not also improve their lives? The first commissioned library to be completed was in Braddock, Pennsylvania in 1889. The Braddock library building included recreational facilities like billiard tables and a bathhouse (indoor plumbing wasn’t common at the time). An addition only four years later added a Music Hall, a gymnasium, a swimming pool, and two-lane duckpin alley to the library building. Who says libraries originally had to be quiet? 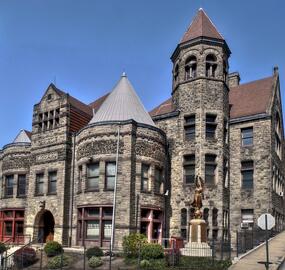 The first several libraries were established by Carnegie himself, but it was not long before communities requested funding to build their own. “The Carnegie Formula” required a financial commitment from towns seeking funding. He believed that if the libraries were funded from endowments, the communities would not be as invested in them. A community needed to demonstrate the need for a library, provide the building site, chip in 10% of the building cost each year, and give free access to all. Almost every application received approval. In total, Carnegie funded 1,681 library buildings across the country.

But the story of the Braddock library was not over. Over the next 100 years, many of these Carnegie libraries fell into disrepair, including the very first. Due to lack of funding, the Braddock library was set for demolition in the 1970s. However, the community rallied and raised the money to purchase the building and gradually bring it back to working order. The Braddock Carnegie Library is open to the public, and work continues to restore the Music Hall to its former glory.

It seems as though Carnegie was proven right in his prediction about public libraries in the case of the Braddock library—it’s up to the community to protect this valuable resource to ensure its future.