Today, we kick off a series about the most exceptional libraries in the world. Focusing on everything from Shakespeare to botany, they hold some of the rarest books and print materials on earth.  For those of you who cannot physically visit these places, we hope our articles will provide a peek into the amazing breadth and richness of book collecting.

There are three must-see vacation destinations for the Shakespeare lover: his home in Stratford-upon-Avon, the Globe Theatre in London, and the Folger Shakespeare Library in Washington, D.C.

Found across the street from the Library of Congress, The Folger Shakespeare Library is the most extensive collection of materials relating to William Shakespeare in the world, and it boasts the 3rd biggest collection of early English books anywhere (preceded only by the British Library and Oxford’s Bodleian Library). 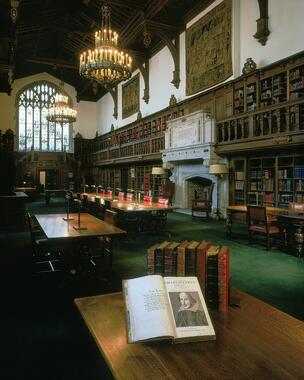 The Folger Shakespeare Library has its roots in the personal collection of Henry and Emily Folger. Henry Folger (whose uncle founded the coffee company) became interested in William Shakespeare after attending a lecture by Ralph Waldo Emerson in 1879. He married Emily in 1885 and bought his first rare book, a copy of Shakespeare’s Fourth Folio (1685), for $107.50.

Henry was a successful oil tycoon whose wife, Emily, shared his passion for Shakespeare. Together, they envisioned a building where they could open their collection to researchers and scholars. Construction plans for the Folger Shakespeare Library were underway when Henry died unexpectedly in 1930. Emily oversaw the completion of the library and even sustained the project through the Great Depression at enormous personal expense.

Since the Folger opened its doors in 1932, successive library directors have broadened the collection beyond Shakespeare to include English material from the early modern age, around 1450 to the mid 1700’s. The library owns a great variety of items including books, manuscripts, playbills, visual art, films, costumes, and musical instruments. The on-site conservation lab at the Folger is internationally known for developing cutting-edge techniques, like paper splitting, to halt the deterioration of precious materials. Since many of the library’s items date back 300-500 years, conservators have plenty of work on their hands. 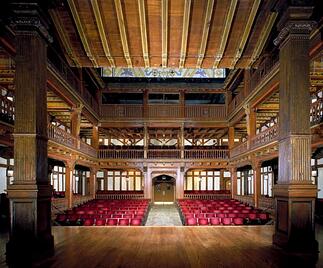 In addition to expanding the collection, the library has also expanded its patron base. The library includes a fully functional theatre with a three-play season for modern audiences, an ensemble-in-residence called the Folger Consort which performs early music and gives seminars, and a poetry reading series that features distinguished poets of all kinds. The Folger works with schools in the D.C. area throughout the year to expose youth to Shakespeare, theatre, and poetry. Families and curious individuals are welcome during special events and programs, often on Saturdays.

Lest you think the Folger only benefits those who live nearby, fear not! Over 80,000 images are available to browse online in the Folger Digital Image Collection and all images may be used through a Creative Commons License. Those interested in hearing news and interesting tidbits from the Folger can follow their blog, The Collation.

Whether you visit online or in person, the Folger Shakespeare Library has a great wealth of knowledge and history to share.