Everyone loves a beautiful, old library with oak desks, cozy chairs, and tall windows. Libraries built during the economic boom of the mid-20th century, however, were often used as a playground for architectural experimentation, particularly on college and university campuses. Sometimes the result was instantly regrettable; at other times, it was intriguing and other-worldly. The Geisel Library at the University of California, San Diego falls in the latter category.

Architect William Pereira designed the library building (simply called the Central University Library for many years) for UC San Diego in the late 1960s. It has been hailed as an ingenious blend of brutalist architecture (lots of concrete, no decoration) and futurist style. Students call it “the spaceship.” Indeed, it’s easy to see the library building as a glassy flying saucer nestled into its concrete docking bay. It’s been featured in film and television, most notably in the third part of The Attack of the Killer Tomatoes film series and the opening credits sequence of the 1980s TV show Simon & Simon. Rumors abound regarding the library’s other media cameos. 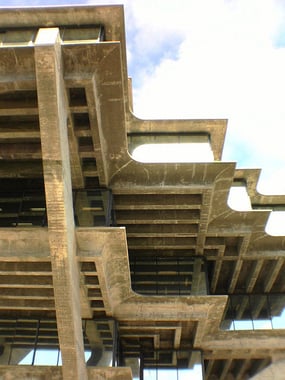 The library’s first two floors are accessed through the central shaft which also contains the elevators and stairs to the upper floors. Floors 4 through 8 are primarily study space and some shelving. After an expansion in 1992, a majority of the shelving was moved to new subterranean wings. Oddly, there is no third floor to the Geisel Library (though it might very well be the outside forum space). According to the original plans, the giant buttresses which support the upper levels were supposed to be made of steel, but cost limitations forced Pereira to use concrete instead. The glass used for the upper floor windows is specially treated to reflect the sky around it, allowing “the vast expanses of glass–38,000 square feet in all–to dematerialize into the sky,” as one architectural writer* put it.

As fascinating as the building is, the Geisel Library stands out for another reason: its recently acquired name. In the 1990s, Audrey Geisel, wife of children’s author Theodor Geisel (better known as Dr. Seuss), donated her husband’s papers, manuscripts, and drawings to be kept at the UC San Diego library. She also donated a substantial sum to the library four years later, and it was renamed the Geisel Library in 1995. Mrs. Geisel tells a story of how she and her husband had once been walking the campus, and Ted was instantly taken with the library’s unique design, saying, “Wow! If I were an architect, that’s the library that I would build.”

And the Geisel Library embraces the creative and whimsical nature of its design. Above the main doors are emblazoned the words READ – WRITE – THINK – DREAM. Besides the invaluable Dr. Seuss Collection (approximately 8,500 items) and the general academic and research collections, the Geisel Library apparently holds a collection of toy pianos which they feature every September in honor of composer John Cage. Librarians and students at UC San Diego clearly love their quirky library, and they will be even happier for it to get a face lift: thanks to a recent $3 million donation from Audrey Geisel, the library will undergo a renovation for better technology and updated décor.

If you ever find yourself in San Diego, make sure to visit this spaceship of a library. It’s the only one of its kind.