Perhaps you’ve seen Louise Erdrich’s novels on bookstore shelves or mentioned in book club circles? While Erdrich just might be one of the most prolific contemporary novelists engaging with American Indian traditions, many readers aren’t especially familiar with her personal background or the role that her fiction plays in preserving the narratives of Ojibwe culture and language. The Ojibwe, or Chippewa, remain one of the largest tribes in the United States today, yet many of us don’t know as much as we should about a culture that remains vibrant in the northern states.

More than many other Native American writers working today, Erdrich significantly historicizes and reinvents the Ojibwe communities that continue to flourish in both the U.S. and Canada. Her fiction intertwines the histories of the Native American tribe with those of early America, and it conceives anew the many untold stories of the Chippewa.

Born in Little Falls, Minnesota in 1954, Louise Erdrich entered our world as the daughter of a German-American father and an Ojibwe-French mother. Her family was deeply immersed in the Native American community—her grandfather as a tribal chairman in the Turtle Mountain Band of Chippewa Indians, and her parents as teachers at a Wahpeton school established by the Bureau of Indian Affairs.

Erdrich earned a bachelor’s degree in English from Dartmouth College in 1976, and a master’s degree from Johns Hopkins University in 1979. Soon thereafter, she began writing a short story, “The World’s Greatest Fisherman,” which would become the foundation for her first book, Love Medicine (1984). By 2009, Erdrich’s novel Plague of Doves led to her esteemed distinction as a finalist for the Pulitzer Prize for fiction.

How do Erdrich’s novels help to preserve Chippewa culture? In addition to depicting the narratives of characters whose stories have been displaced from traditional histories, Erdrich introduces Ojibwe words and phrases into her English-language text. Ojibwe language, which is also called Chippewa, is part of the Algonquian language family. When Erdrich’s characters speak the language in narration and dialogue, her readers become students of the language. In other words, we might sound out the words and phrases we don’t know, thereby teaching ourselves something about the language in the process. Erdrich has suggested that her increasing use of Ojibwe phrases and sentences has coincided with her own learning of the language. Indeed, she expanded Love Medicine in the early 1990s—a novel she published in 1984—to include more Ojibwe words. 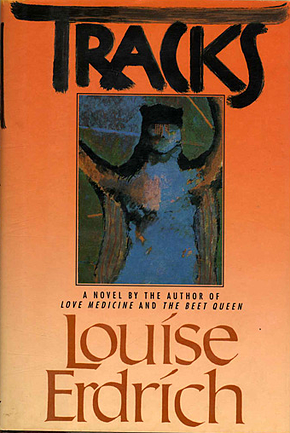 In her novels, Erdrich also explores themes of cultural hybridity, often drawing upon her own European and Native American heritage. While some of her novels are set in a contemporary times, others return to the early twentieth century and the fraught encounters between Native American tribes and U.S. officials. Characters are at once immersed within and radically displaced from the land that surrounds them.

We might think about the very first page of Love Medicine, which provides us with an introduction to one of Erdrich’s earliest characters: “June Kashpaw was walking down the clogged main street of oil boomtown Williston, North Dakota, killing time before the noon bus arrived that would take her home. She was a long-legged Chippewa woman, aged hard in every way except how she moved. Probably it was the way she moved, easy as a young girl on slim hard legs . . .”

If you want to collect the books of someone like Louise Erdrich, where might you begin? You might look, for instance, for a first edition of Love Medicine (1984), or a first edition of Tracks (1988), another of Erdrich’s early novels. Luckily for readers interested in Erdrich, first editions of her novels aren’t especially scarce—you can find them if you seek them out. And some lucky collectors might even find a first edition signed by the author.

And what if you’ve found a first edition but are looking to have your copy signed? You need not travel too far from home to find Erdrich. Indeed, the author owns a bookstore, Birchbark Books, in Minneapolis, Minnesota. For the discerning collector, a road trip just might be worth your while.