While it was the Apollo 11 mission with Neil Armstrong and Buzz Aldrin that first landed on the moon, Apollo 12 marked several important advances in space travel and technology. Apollo 12 was a three-man mission. Its goals were to land on the moon, collect scientific samples and readings, and retrieve parts of the disabled Surveyor III spacecraft.

Its launch on November 14, 1969 could easily have ended in disaster. In the midst of a rainstorm, lightning discharge caused some protective circuits to take the fuel cells offline. Almost every warning light signaled danger. 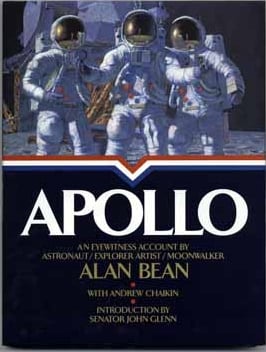 The mission was saved by John Aaron on the ground and lunar pilot Alan Bean who both remembered the same malfunction from tests and trainings. A quick reboot of the system got everything back online and the mission was on its way to the moon. Bean later wrote an account of his experiences on Apollo 12 in his book, Apollo: An Eyewitness Account. He returned to space only once more as part of the Skylab 3 mission to the Skylab space station. Bean then retired to focus on his art. Apollo is an impressive book filled with Bean’s original paintings illustrating his exciting mission narrative.

Unlike the first trip to the moon, Apollo 12 was planned to be a precision landing. Automatic guidance systems directed the landing successfully with only a few adjustments from Commander Charles “Pete” Conrad. This was a significant step forward for the space program – lunar missions could now be targeted for rougher terrain.

One not-quite-realized advancement in Apollo 12 was their planned use of a color television camera to broadcast their moon time live. Unfortunately, Bean accidentally pointed the camera at the sun and fried it after descent.

Conrad was the third person to walk on the moon and Bean was the fourth. They spent roughly 31.5 hours on the lunar surface while command module pilot Richard Gordon remained in orbit. They collected rock samples, tended to the Surveyor III, set up equipment to take seismic and magnetic readings, and performed a three hour geology traverse across the surface. Conrad was already in the midst of an illustrious career at NASA, flying with Gemini missions 5 and 11, and he would go on to command the first manned flight to the Skylab space station. His biography, Rocketman: Astronaut Pete Conrad’s Incredible Ride to the Moon and Beyond, was published in 2005 after his death.

Apollo 12 returned to Earth on November 24, 1969 without a hitch. Perhaps Apollo 12’s biggest contribution to space travel was its demonstration that the success of Apollo 11 had not been a fluke. Humans could now reliably fly to the moon.