Historical fiction, of which biographical fiction is a subset, can in many ways be considered one of the earliest literary trends. Writing about history, sometimes real and sometimes imagined, connects Homer’s Iliad (c750 BC) to Shakespeare’s history plays to Robert Coover’s The Public Burning (1977). In the case of the earliest English language novels, it was popular to market even fantastical novels as being the stuff of historical or biographical truth. Aphra Behn’s Oroonoko (1688) and Daniel Defoe’s Robinson Crusoe (1719), for instance, were presented to contemporary readers in the style of biography, journalism, and recovered documents. In this way, it is easy to take a blasé attitude toward biographical fiction. To do so, however, would be to tragically overlook the literary contributions of Irving Stone. 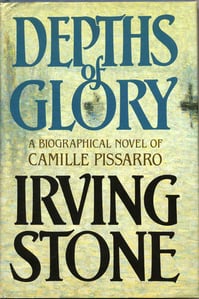 Irving Stone, who would ultimately come to define the contemporary biographical novel with works like Lust for Life (1934) (which gave a fictional account of the life of artist Vincent Van Gogh) and The Agony and the Ecstasy (1961) (which gives Michelangelo the same treatment), was born in San Francisco in 1903. Though he studied political science when he attended school at UC Berkley, he was an avid reader as a child and took to the writing lifestyle almost immediately upon the completion of his studies. In 1926, Stone left the United States for France, where he began working to become a playwright. Over the course of the next year he wrote 17 plays but was unable to sell a single one.

His Paris years were, however, not a complete loss. By utter happenstance, Stone one day stumbled upon a Van Gogh exhibition at Paris’ Rosenberg Galleries. Stone later remarked, of the experience of viewing Van Gogh’s work in that setting, "It was the single most compelling emotional experience of my life." He further noted, “[though I] felt I did not have sufficient technique to write a book about Vincent van Gogh, I knew I had to try. If I didn't I would never write anything else." Ultimately, the tremendous emotional significance of the artist’s work was combined with months of rigorous research into his life. The resultant manuscript, despite being rejected by 17 publishers in three years, ultimately became one of Stone’s best loved works and was later adapted into an Oscar-nominated film starring Charlton Heston. 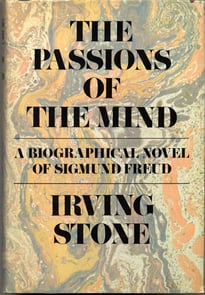 Over the course of the next five decades, Stone would publish more than two dozen novels, most of them works of biographical fiction. In 1971 he published The Passions of the Mind which followed seminal psychologist Sigmund Freud. Nine years later, he took on Charles Darwin in The Origin, and 1985’s Depths of Glory found the writer inhabiting the mind of impressionist painter Camille Pissarro. While few of his books attained the same level of recognition as Lust for Life and The Agony and the Ecstasy, his work has been not just consistently interesting, but consistently well-researched and well-imagined.

One can envision the sudden burst of emotional intensity that spurred his first novel being replicated time and time again throughout a prolific career. Dates and names are transmuted, in his hands, into portraits colored with equal parts meticulous craft and deeply felt emotion. And, after all, isn’t that exactly what we want from a novelist of any stripe?