Dr. Jane Goodall, widely known for her contributions to the scientific study of chimpanzees in Tanzania, has also contributed tremendously to the breadth of non-fiction literature surrounding her topic of study. Goodall has published numerous accounts of her time in Gombe Stream National Park interacting with and observing the chimpanzees there, and each work is more riveting than the next.

Goodall's writing style is compelling. Her works are true, scientific accounts, and yet they read like finely crafted pieces of fiction. In short, they draw you in and give an intimate look at the human-side of chimpanzee life. 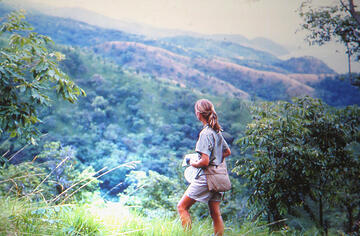 Goodall began her research in 1960 when she was sent to Gombe Stream National Park, Tanzania by Louis Leakey, a renown anthropologist and paleontologist. He needed someone with patience and dedication to observe chimpanzees. Goodall fit the bill and set out to record everything she could about the chimpanzees in Gombe.

Initially, her work yielded few results as the animals fled whenever she was near. Slowly, she gained their respect, and they soon allowed her an up-close glimpse at their lifestyle. One of her first major findings was the discovery that chimpanzees used tools - countering the belief that only humans could do so.

She also discovered that the chimpanzees, once thought to be a primarily vegetarian species, hunted and consumed a number of small animals. Her research was groundbreaking.

As Goodall delved deeper into her studies, Leakey felt she needed a PhD to give credibility to her work. Goodall had never earned a bachelor's degree. Still, she enrolled at Cambridge for graduate school - one of the first to do so without a prior degree. She maintains that she used her time in school to figure out how to argue her points so that they couldn’t be disputed. Goodall’s focus was always the social, personal, and "humane" side of chimpanzees. This was often in direct conflict with the preferences of those in academia.

So, she used her time in the academic world to figure out how to research and record in a way that couldn’t be attacked. For instance, when she wanted to call a chimp “jealous,” her mentor at Cambridge would remind her that she couldn’t say that because she didn’t know it as fact. Instead, she had to frame her argument stating that the chimpanzee “behaved in such a way that had she been human, we would say she was jealous.” 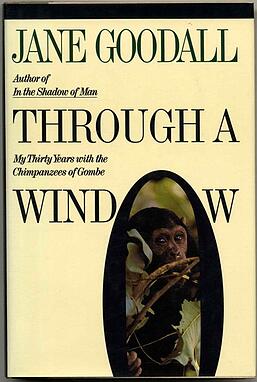 Goodall has always had a knack for seeing the wonder and personal side of the animal kingdom. She credits her dog, Rusty, for giving her the lifelong desire to see animals as they are, rather than how we would guess them to be. Goodall shares a great deal about Rusty in her book My Life With the Chimpanzees. Likewise, in an interview with PBS, Goodall cites her “amazing teacher” Rusty as the one who showed her “that animals have personalities, minds and feelings.”

We are treated to a number of stories about the relational nature and power-structure of the Gombe chimpanzees in Goodall’s book, Through a Window which focuses on her studies through the 1980s. Readers are immediately enveloped in the scenes Goodall witnessed. She perfectly describes the stillness of a morning, her anticipation of a day spent in observation, and the abrupt movement and activity within the colony of chimps. We become thoroughly acquainted with the chimpanzees as the book progresses, from the mothers and children to the alpha males and elders. In a way, reading her works allows one to feel as if we are there alongside Goodall, taking in everything she observes first-hand.

For further information about Jane Goodall and a summary of some of her most triumphant and painful discoveries, her autobiographies in letters, Africa in my Blood and Beyond Innocence, prove poignant reads. You might also consider one of our autographed copies of Goodall's works as a gift for the science and book lovers in your life.