The exceptionally talented novelist and essay writer Mario Vargas Llosa won the Nobel Prize for Literature in 2010 due to his ability to impact people all over the world with his writing, and he is considered to be one of the greatest writers of his generation. Much like a literary character, Llosa has experienced a great amount of controversy in his lifetime. While he remains very active in politics, his opinions continually get him into trouble. 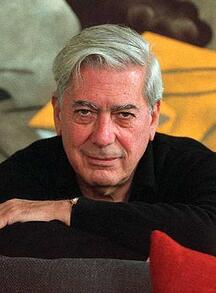 During the 1980’s Llosa revealed his right-winged ideals when he started a movement against then President Alan Garcia. Garcia wanted to nationalize Peru's banks, and Llosa quickly gained a following of people who disagreed with this notion. They organized into a political party. Llosa ran for the Peruvian presidency in 1990 and was largely expected to win. However, he lost to opposing candidate Alberto Fujimori.

By 1992, Llosa had already begun a campaign against Fujimori’s policies after the President shut down Congress and ceased the use of the constitution. This time around, Llosa did not have a significant following. His rebellion against the government was too risky. Meanwhile, after serving as the President of Peru, Fujimori was arrested and is currently serving a 25-year sentence in prison for human rights violations.

Llosa later formed a group to create a Memory Museum, in honor of all the men, women, and children who lost their lives during the internal conflict Peru faced from 1980 to 2000. He hoped the museum would help with the healing process, expose truth to the citizens of Peru, and make the moment in history very real—for many people would rather forget. The museum continually has difficulty because Fujimori supporters feel that the idea of the museum is a one-sided mockery of everything Fujimori accomplished. However, Llosa felt that it was important to show all different sides of the conflict in the museum in order to promote unity in Peruvians. The museum is presently set to open the Spring of 2014.

Politlcs Instead of Literature in Argentina

Following the receipt of his Nobel Prize, Llosa was invited to inaugurate Argentina’s annual book fair for the year 2011.  The idea of giving him such an honor did not sit well with many Argentinians due to Llosa's criticism of their president, Cristina Fernandez. The director of Argentina’s National Library uninvited him, but President Fernandez ordered him to recant the letter, insisting that everyone has the right to speak their mind in Argentina. Her cabinet was not so forgiving, with Anibal Fernandez later claiming that Llosa is an enemy of the government, making a mockery of them and their people.

Previously, Llosa praised Argentina for their amazing efforts in education; the country had an extremely high literacy rate and excellent school systems. However he warned the people that the government and economy was heading in the wrong direction. Llosa ultimately gave the speech—which did focus more on politics than his literature—and despite what was expected, there were no protestors or confrontational reaction to his presence.

Longtime friend of Llosa’s and fellow Nobel laureate in literature, Gabriel García Márquez, sparked another infamous quarrel with our controversial author. According to several sources, Márquez walked up to Llosa

outside of the theatre in Mexico City, and instead of receiving the embrace he was expecting from Llosa, Márquez was presented with a swift punch to his face, leaving him with a black eye.

Some argue that Llosa punched Márquez due to political differences—Márquez was a firm supporter of Castro and has leftist views, while Llosa has sided with the right side of the political spectrum for some time. Others insist that their quarrel happened because of the way Márquez consoled Llosa’s wife during a difficult time in their marriage. And the public may never know what was really going through Llosa’s mind when he threw the blow; neither author has officially made a public statement. They remained distant for 31 years and allegedly reconciled in 2007, but the truth behind this story remains obscure.

Although Llosa was given the Nobel Prize for literature, he wasn’t a popular choice. Many agreed that he was not fit for the award due to his strong political stances, and some claim that that is why he was not selected sooner. In the end, his art proved to inspire more than it didn’t, granting him an unforgettable honor.