Mark Twain and the Most Famous Children's Book in Europe

Randolph Caldecott and John Newbery both made significant contributions to children's literature, but another figure gave us the volume that is arguably the best known children's book of the nineteenth century. Dr. Heinrich Hoffman wrote Der Struwwelpeter in 1841, and the book rapidly became a hit. Fifty years later, it would draw the attention of Mark Twain, whose own translation of the book would not be published until 35 years after Twain's death. 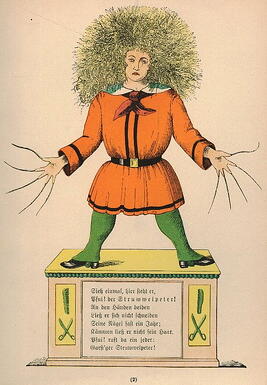 Hoffman never intended his book to be public. He often saw children during his house calls and wanted to entertain them with a book. But he was disappointed with the books available, so he opted to pen his own. Hoffman's book included eleven children's poems that recount the exploits of mischievous children. As cautionary tales go, they'd probably be considered too violent or morbid for modern readers, but they were perfect for Victorian England, when death, gore, and bodily function (or failure) were simply facts of life.

Hoffman's young patients loved Der Struwwelpeter,and his friends urged him to publish the book. Reluctantly he agreed, publishing 1,500 copies under the title Lustig Geschichetnen und drollige Bilder (Jolly Tales and Funny Pictures). The book sold out within four weeks, and new versions--both authorized and unauthorized--popped up all over the place. Soon, the book's given title was forgotten, and everyone knew it by its most memorable character, Peter. Thus Der Struwwelpeter took Europe by storm, and the book is now considered Germany's greatest contribution to children's literature since Grimm's Tales. Translations abounded, and the most common English title remains Slovenly Peter.

Fast forward to 1891. Mark Twain was visiting Germany with his family--and despairing of his finances. A few investments had failed, so Twain desperately needed to make some quick cash. He stumbled on Der Struwwelpeter and immediately thought he'd found a guaranteed bestseller. By this time, Twain was already quite famous. He'd also established himself as a preeminent author of children's literature with The Adventures of Tom Sawyer and Huckleberry Finn. He figured that his translation of Hoffman's book would be a smashing success in both America and Europe.

Twain had always been fascinated with impish children, making the story a perfect project. He wrote to his publisher on October 27, 1891, "I have worked myself to death for the last three days and nights translating...the most celebrated children's book in Europe." Twain's translation was an innovative one. He focused on details and aspects that most other translations ignored, adding a bit of his own character and flair.

Twain soon finished his translation and hoped to publish it in time for Christmas. But he was not so lucky; his publisher encountered a host of copyright issues. The book was finally published in 1935, long after Twain's death--he never profited from his tireless efforts. The Limited Editions Club edition of 1,500 copies  is printed on French-folded sheets and bound in decorative cloth. It includes a foreward from Twain's daughter Clara, explaining the circumstances that brought her father to translate the book. Twain's edition was, predictably, a popular seller and brought the story to a much broader American audience. It has maintained its popularity and was the basis of the 2003 Broadway musical "Shock-headed Peter."