On August 24, 1869, an unsigned editorial appeared in the Buffalo Express. Written by none other than Mark Twain, the short piece defended Harriet Beecher Stowe, who had recently published a scandalous exposé on George Gordon, Lord Byron. Twain defended Stowe not once, but seven times, illustrating his intense interest in Stowe's literary career. 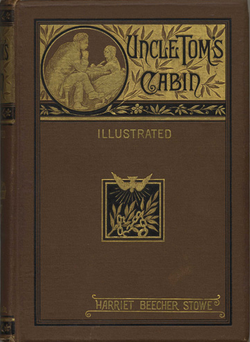 The beginning of 1869 found Atlantic editor James Fields on a six-month tour of Europe. It was during his absence that a shocking submission arrived from Harriet Beecher Stowe. William Dean Howells, who was filling in for Field, could not decide what to do. Stowe was already a celebrated author thanks to Uncle Tom's Cabin (1852), and she'd been published in the Atlantic several times before. But the content of her latest submission offended every fiber of Victorian gentility; she alleged that Lord Byron "fell into the depths of a secret adulterous intrigue with a blood relation, so near in consanguinity that discovery must have been utter ruin and expulsion from civilized society." Though Stowe circumspectly refrained from naming Lord Byron's half-sister, Augusta Leigh as his partner in crime, she left no doubt about the identity of Lord Byron's lover-relative.

Howells consulted the owners of the Atlantic, James Russell Lowell and Oliver Wendell Holmes. While Lowell found the article far too controversial, Holmes urged Howells to print the piece because it would sell papers. And sell it did! The issue--predictably--sold out almost immediately. But in the months after the article ran, the paper lost as many as 15,000 subscribers. They had successfully alienated their staunchly Victorian readers, who believed that such matters ought not appear in print...and certainly shouldn't be written about by a woman. Howells reported "howls of rejection from almost every side where a critical dog is kept." Because the article also ran in England in Macmillan's Magazine, Stowe faced vociferous criticism from both sides of the Atlantic. Yet she stood by her decision to publish the article, even expanding it into a full-length book called Lady Byron Vindicated in 1870.

Stowe had struck up a friendship with Annabella Milbanke, Lady Byron when she visited England to promote Uncle Tom's Cabin in 1856.T he two women quickly became confidantes, sharing the most personal details of their lives. When Lady Byron (pictured at left) was on her deathbed, she had asked Stowe to come to her country estate for a "private, confidential conversation upon important subjects." Then she unburdened herself of all the secret trials of her marriage to Lord Byron.

Then Lord Byron's lover Countess Teresa Guiccioli published her Recollections (1869), in which she painted Lady Byron as a cold, unloving wife who had wrongly abandoned her husband. Stowe felt compelled to defend her friend's honor. Unfortunately Stowe's defense of her friend's reputation came at the expense of her own: Stowe encountered so much vitriol that she enlisted her sister Mary Beecher Perkins to write in her defense and retained her other sister Isabella Beecher Hooker as her secretary. Her brother-in-law John Hooker provided legal counsel. But Stowe would be unable to salvage her reputation or her writing career. Book sales plummeted, and Stowe never regained her former prominence.

Mark Twain was one of few to defend Stowe, writing a total of six editorials and a humorous sketch about what came to be known as the "Byron scandal." In his August 24, 1869 Buffalo Express editorial, Twain says, "To some, who cherish an ancient political grudge against the author of Uncle Tom's Cabin, there seem to be a sufficient reason for savagely denouncing the story, in the fact that it comes from Mrs. Stowe, whom the improve the occasion to abuse." Twain later defended Lady Byron as "a woman not only of remarkable loveliness, both in person and disposition, but of remarkable mental gifts." Meanwhile Twain denounced Lord Byron as "a bad man, so bad perhaps, as a man with a great intellect, a passionate animal nature, intense egotism and selfishness, and little or no moral principle to restrain or govern either of those, could be." Twain argues, "there is no question that it was [Stowe's] duty to set [Lady Byron's story] before the world."

Twain's sketch verges on impropriety itself. While other commentators echo Stowe's circumspect tone and talk about Lord Byron's behavior only in euphemism, Twain makes numerous bawdy references to parts of Bryon's anatomy and to sexually transmitted diseases. He also pokes fun at those who discuss the Byron scandal with no real knowledge of any of the key players or Stowe herself. Indeed, one of the sketch's protagonists says that Stowe wrote not only Uncle Tom's Cabin, but also the Dred Scott decision and a number of other "colored works." Even if Twain had not been so brazen in his defense of Stowe, it was likely a courageous move to defend her at all. Given the Atlantic's propitious drop in subscriptions, Twain could have jeopardized the Buffalo Express, of which he was managing editor and part owner. He may have acted under pressure from Reverend Thomas Beecher, who'd recently defended his sister in the Elmira paper.

Regardless of his specific motives for vindicating Stowe, Twain had developed a keen interest in Stowe's career. He appreciated the content of Uncle Tom's Cabin, certainly, but he was more interested in the book's popularity and the way that it seemed to take on a life of its own. Twain also saw parallels between his own works and Stowe's. He hoped that with Innocents Abroad he would attain the same financial success that Stowe had achieved. (He may have after several years, but the book's initial sales were less than impressive.) Twain even wanted to live where the Stowe's lived, in the Nook Farm community in Hartford. The Stowe family controlled most of the land there, and Twain initially rented Isabella Beecher Hooker's home, making him Stowe's neighbor. And Twain would refer to Stowe's copyright problems when he testified before the congressional committee on copyright reform in 1906.

Unfortunately for Stowe, Twain's support was not enough. The tide of public opinion had taken an irrevocable turn. Unable to make a living with her pen, Stowe decided to move to Florida with her family. Luckily time has looked favorably upon Stowe, and she once again occupies a position of pride among American authors who have truly shaped history.