"Get the facts first. Then you can distort them as much as you like."
-Dan DeQuille, reporter, Territorial Enterprise, ca 1862

Before he would pen Huckleberry Finn or Tom Sawyer or even adopt the pseudonym "Mark Twain," Samuel Clemens tried his hand at mining. He had little luck, however, and soon turned to journalism to make a living. Clemens got hired as a reporter for the Territorial Enterprise, the largest newspaper in Virginia City, Nevada. Though Clemens did some honest reporting, he also earned a reputation for publishing pranks and hoaxes--often under his new pen name.

Twain Misses His Mark with the Petrified Man Hoax

In Twain's time, journalists took a much more liberal approach to "reporting the truth," as Dan DeQuille's advice (above) clearly illustrates. Competition in the newspaper industry was fierce; anyone could start a newspaper, so large cities often had numerous periodicals. Editors and reporters would do whatever was necessary to sell as many papers as possible. Shortly after Twain started working at the Territorial Enterprise, for instance, DeQuille published a story about an inventor who'd come up with "solar armor," which he described as sort of a primative personal air conditioner. According to DeQuille, the hapless inventor had tried out his contraption in Death Valley--and froze to death when the device malfunctioned and covered him in frost! There was hardly an ounce of truth in the entire account.

Meanwhile, Twain was fed up with all the ridiculous stories about petrified bodies. The topic was quite in vogue, and newspapers all over the world published less than credible discovery stories. According to Twain, "The mania was becoming a little ridiculous...I felt called upon to destroy this growing evil. I chose to kill the petrification mania with a delicate, a very delicate satire." Twain decided to create his own "petrified man" story and make it so ridiculous that no one could possibly believe it.

Twain also decided that the story offered the perfect opportunity to mock a local politician whom Twain considered an idiot, Judge Sewall. Twain said he "thought I might as well touch him up a little at the same time and make him ridiculous, and thus combine pleasure with business."

The resulting account appeared on October 4, 1862 in the Territorial Enterprise. Twain recounted the discovery of a petrified body in nearby Gravelly Ford. "Every limb and feature of the stony mummy" he claimed, "was perfect, not even excepting the left leg, which had evidently been a wooden one during the lifetime of the owner." Twain went on to provide an elaborate but oblique description of the petrified man's position:

"The body was in a sitting posture, and leaning against a huge mass of croppigs; the attitude was pensive, the right thumb resting against the side of the nose, the left thumb partially supported the chin, the fore-finger pressing the inner corner of the right eye and drawing it back partly open..."

If anyone had taken the time to recreate the position, it would have been obvious that Twain was playing a prank. The illustration below, from the 1882 edition of Twain's Sketches, New and Old, indicates that the account was a complete folly. Twain goes on to say that a Humboldt City judge, named Sewell or Sowell, had arrived to perform the inquest. When locals tried to remove the body for burial, they found it stuck in place. The judge had to bar them from blasting the body loose. 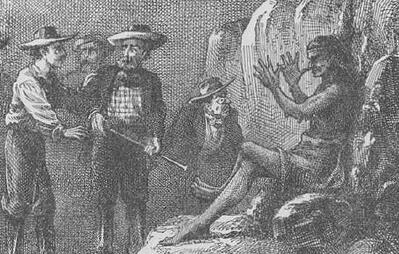 Unlike Twain's subsequent stunts, the petrified man hoax grew into an international phenomenon. The fascinating account found its way into papers all over the United States, and then all over the world. It even appeared in the London Lancet and, in 1863, in newspapers in Australia and New Zealand. Twain, who considered the story "a string of roaring absurdities" could hardly believe that people could be so gullible. But he took full advantage, harassing Judge Sewall by mailing him a clip every time the story appeared in a different newspaper. "I did it for spite, not for fun," he said, and added that there were so many clips, Judge Sewall was quite overwhelmed with mail.

Twain Massacres the Hopkins Family with His Pen

Twain had published the petrified man story anonymously, but only months later he would adopt his now-famous pseudonym. Scholars generally believe that Twain chose the name because of its association with his old life as a riverboat captain. But biographer Joseph Kaplan suggests a different antecedent: on the Nevada frontier, barkeepers would "mark twain" when they recorded two drinks on someone's account--quite a common practice! 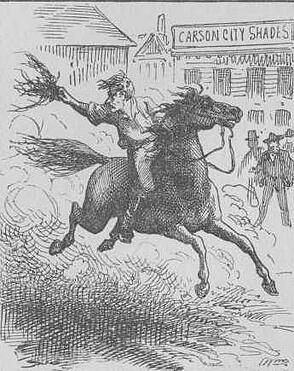 Regardless of its origins, the pen name made its debut and Twain used it with reckless abandon. On October 28, 1863, he published a particularly grisly tale under that name. Twain alleged that a local man named Hopkins had gone mad and butchered his wife and children. According to Twain's sensational account, Hopkins had ridden into town on horseback carrying the "reeking scalp" of his wife. He collapsed in front of a local saloon, where he died. Authorities reportedly found Hopkins' children butchered in their beds, though two little girls survived.

What had triggered Hopkins' homicidal insanity? Hopkins had followed the advice of San Francisco newspapers and invested in the city's utilities. But the utilities were cooking their books, and Hopkins lost everything. Twain alleged that Hopkins' utter despair had driven him to insanity and murder--which wasn't entirely unlikely on the frontier, where people made and lost their fortunes every day. In fact, such gruesome stories graced the papers every day, so hardly anyone thought that Twain might have made up the entire horrific tale...even though the real Hopkins was a confirmed bachelor who was still obviously alive and well.

This time, Twain's motivations were somewhat more political. That year the San Francisco newspapers were on a mission to expose fraudulent mining ventures. At the same time, the newspapers were also encouraging readers to invest in San Francisco utility companies, whose practices were also far from ethical. Twain wanted to force the newspapers to criticize the utilities, so he came up with the most violent tale he could think of, knowing that it would be widely reprinted before his own dishonesty came to light. In his headline, Twain called Hopkins "A Victim to Jeremy Diddling Trustees--He Cuts his Throat from Ear to Ear, Scalps his Wife, and Dashes Out the Brains of Six Helpless Children!"

Reflecting in Sketches, New and Old, Twain referred to this episode as a "burlesque." He considered it a "deep, deep satire, and most ingeniously contrived." But all his absurd details, which anyone familiar with the area would find inaccurate, were lost on an audience satisfied to revel in the titillating details. Once Twain's dishonestly was revealed, he faced considerable blowback from the public. Twain's editor came to his defense and let Twain keep his job.

Twain Crosses the Line with Miscegenation

In the case of Carson City, however, citizens weren't worried about fraudulent use of their money; they didn't want their money to support the Freedmans' Aid Society, which received funding from the Western Sanitation Commission in St. Louis. Thus when it came time for the Carson City charity ball, many members wanted to direct those funds to the US Sanitary Commission in New York instead. Twain found the whole debate utterly ridiculous.

On May 17, 1864, while his editor Joe Goodman was out of town, Twain published an (unsigned) piece called "Grand Ball at Los Angeles Plata." In the editorial, Twain demanded to know why the Great Austin Flour Sack hadn't been brought to Carson City to raise money. He also said that the money was going to benefit not the Sanitation Commission, but the Miscegenation Society. He obliquely added that the piece was a hoax, "but not all a hoax, for an effort is being made to divert these funds from their proper course."

At the time, miscegenation was quite the hot topic. Just before Christmas of 1863, a 72-page pamphlet had appeared on New York newsstands. Published anonymously and sold for a quarter, the pamphlet was titled "Miscegenation: The Theory of the Blending of the Races, Applied to the American White Man and Negro." The author actually coined the term "miscegenation," arguing that the common term of "amalgamation" was hardly scientific enough. The author also encouraged the practice, saying that it should be a central goal of the war effort, and argued that President Abraham Lincoln should make it part of his election platform in 1864. Incredibly inflammatory for the time period, the pamphlet quickly made headlines across the country and incited a furor--along with a flurry of racist retaliations in print. Later it would turn out to be a propaganda piece written by Democratic reporters eager to introduce a hot-button issue into the election. 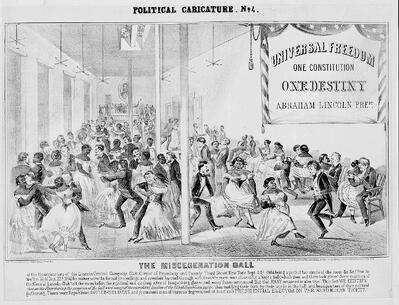 Twain's article only fanned the flames of racist sentiment, revealing the true colors of his peers. Even those who called themselves abolitionists were offended by the thought of miscegenation. When Twain's authorship was revealed, Mollie Clemens was totally ostracized from polite society. Sanitation Ball leaders called the story "a tissue of falsehoods...made for malicious purposes." Twain's piece ignited a public battle, played out first in the newspapers, and then on the dueling field. A fellow reporter was injured in a duel with a reporter from a rival paper, and Twain himself challenged two others to duels. By May 24, 1864, Twain was forced to print an (again unsigned) apology. He also risked arrest for violating laws against dueling, and his reputation was forever damaged in the community.

On May 25, 1864, Twain wrote an apology letter to Mollie and to Orion, the head of the local Sanitation Commission. The following day, he wrote to his brother, asking for a $200 loan. He said his brother could send the money to San Francisco. Twain left Carson City, Nevada by stagecoach on May 29, 1864.