Maurice Maeterlinck and the Mystery of Life

Maurice Maeterlinck was a Belgian playwright and essayist who won the Nobel Prize in Literature in 1911. If Maeterlinck’s name is new to you, as it may well be, it’s likely because his work is of an uncommon variety. What has certainly hurt the playwright’s longevity is that he chose to pick sides...and lost. Maeterlinck staunchly resisted the aesthetic tides of naturalism and realism, instead aligning himself with the aims and sensibilities of the Symbolist movement. The problem is, of course, that the realistic style has prevailed to this day, while Symbolism has ostensibly perished. Yet, Maeterlinck’s defiance of the dominant trend helped him to admirably explore his principle concern: What lies behind the mysteries of life? 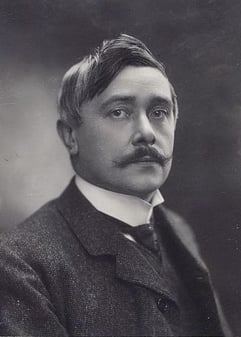 Realism, the style of Chekhov and Ibsen, has endured the best of all recent dramatic movements. A walk through any of the world’s major theatre districts will prove it is very much alive and kicking. Yet Symbolism did not vanish because it was useless. It simply met the fate of nearly every aesthetic movement — it had its moment under the sun, and subsequently influenced the next wave of artists, who appropriated the movement’s virtues and discarded its weaknesses, so that they could go on to create the art that spoke best to their own time.

Maeterlinck and his fellow symbolists believed that realism was too confined, too preoccupied with observable and terrestrial life. Symbolists wanted to see humanity in relation to its grander cosmic existence. They were after ideals: What is our relation to death? What is the nature of our spirit? What forces govern our fate and decisions? They believed that the only way to explore these and other questions was to rely on otherworldly settings and elements. Let the realists have their parlors and living rooms; symbolists preferred dreams, fairy tales, and landscapes borne in the imagination.

The greatest of universal laws is death. Maeterlinck grappled with its inevitability and our powerlessness against it in The Intruder (1891). It is a one-act play, and introduces an extended family — a grandpa, a father, an uncle, and three daughters — as they wait upon the ailing mother, who had just given birth. The characters are essentially helpless and ineffectual, and the play ends with the announcement that the mother has died. The intruder, of course, is death, and there is no lock we can put upon our homes to keep him out.

Maeterlinck's play, The Blind (1891) is similarly fatalistic. It centers upon a dozen blind men being led through the woods. Suddenly, they lose their guide, and wonder where he must have gone. Eventually, they discover, he has died, and his corpse has been before them the whole time. These anxieties about death, and the preternatural forces that govern and shape our lives, are a major preoccupation for Maeterlinck.

Maeterlinck, by many readers’ standards, fails at the art of characterization. In The Blind, the characters are named only by a blanket descriptor (e.g. Eldest Blind Man). His characters have little of the quirks and nuances, or at least great traits of personality that we would expect to find in the work of a contemporary like Ibsen. Maeterlinck’s plays prefer to lean toward parable and allegory, the perennial and the symbolic, rather than the “slice of life” storytelling of the realists and naturalists. This distinction, while an impediment to the tastes of certain audiences, is nonetheless essential to Maeterlinck’s ability to explore those ideals and forces that are far too large to fit on the stage. 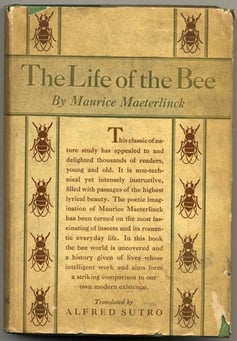 Maeterlinck used symbols to illuminate nature, spirituality, existence, and the myriad of incalculable and invisible forces of being. One of the writer’s most innovative wellsprings of symbols was the biological world. Maeterlinck wrote two extended essays, The Intelligence of Flowers and The Life of the Bee, which were not, as he insisted, scientific inquiries. Rather, he looked into the natural world to illustrate his views about life itself. Drawing on his twenty-year experience as a beekeeper, Maeterlinck extols the many properties of the hive. Their hexagonal structure is ingenious, by any standard, including human ones. The bees’ organization and cooperation is sublimely coordinated, and their self-sacrifice “undoubtedly passes the limits of human morality.” What is it that empowers the bees to act with such astonishing unity? Maeterlinck argues that such an inspiration transcends both instinct and intelligence, and comes from a force of nature so grand and complex that our very capacity of comprehension is limited. Bees, as small as they are, live in a world as beautiful and inscrutable as our own.

Maeterlinck’s work can be at times difficult and alienating. His plays may appear to be the product of a literary experiment that has fallen out of fashion. But Maeterlinck’s ambition, his desire to give a form to the formless, to assign words to the ineffable, ranks him among the most serious of artists. His writing works to make sense of a disjointed and chaotic world, and find a beautiful unity among all things, from the grand force of death to the indetectable business of the bee.