Maurice Sendak and the 'In the Night Kitchen' Kerfuffle

"Maurice Sendak might faint but a staff member of Caldwell Parish Library, knowing that the patrons of the community might object to the illustrations of The Night Kitchen, solved the problem by diapering the little boys with white tempera paint. Other librarians might wish to do the same."

So ran the entire letter from Caldwell, Louisiana librarian Betty B. Jackson in the December, 1971 issue of School Library Journal. Though the letter was published unedited, the journal's editorial staff placed it under the headline "Three-Cornered Censorship" and opposite a half-page illustration of the "Cock-a-Doodle-Doo" image from Maurice Sendak's In the Night Kitchen. In this iconic picture, the story's protagonist, Mickey, is depicted au naturel, which is why the book had raised eyebrows at Jackson's library--and in plenty of other places around the country. But negative reactions to the book were later overblown by the press. 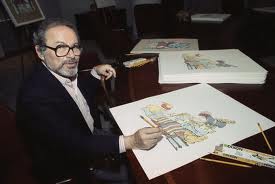 Sendak No Stranger to Controversy

This was not the first time that Maurice Sendak had ignited controversy. When the Caldecott Medal-winning Where the Wild Things Are was published in 1960, critics feared that the book was too frightening for children. Moreover, child psychologist Bruno Bettelheim told Ladies Home Journal in March, 1969, "The basic anxiety of a child is desertion. To be sent to bed alone is one desertion, and without food is second desertion. The combination [in Where the Wild Things Are] is the worst desertion that can threaten a child. Bettelheim later admitted, however, that he had read only a summary of the book. Meanwhile the Journal of Nursery Education offered an editorial opinion of the book in September, 1964: "We should not like to have it left about where a sensitive child might find it to pore over in the twilight."

Nevertheless, Where the Wild Things Are catapulted Sendak to international fame, which gave him new freedom as an artist. By this time, he was already critically acclaimed. He'd won five Caldecott Honors and a Caldecott Medal. His books were frequently recommended for purchase in library journals. And Sendak himself cared little for the negative press anyway. It's no wonder that he would again push the envelope the following year, with In the Night Kitchen.

Sendak made a somewhat unusual decision when he portrayed Mickey, the protagonist of In the Night Kitchen completely nude. But such a choice shouldn't have surprised anyone; Sendak was constantly exploring limits--and ignoring them. He undoubtedly blew of New York Times critic Saul Braun's assertion that In the Night Kitchen was "sure to offend." And school librarians weren't turned off, either. Editors at both Children's Catalog and Elementary School Library Collection recommended the work for core collections, and other publications also endorsed the book for purchase by school librarians.

Then came Jackson's letter to the School Library Journal. Sendak's editor at Harper, Ursula Nordstrom, responded in 1972 with an inflammatory press release "denouncing the outrageous treatment of In the Night Kitchen." Nordstrom exhorted librarians to sign a statement saying "We as writers, illustrators, publishers, critics, and librarians, deeply concerned with preserving First Amendment freedoms for anyone involved in the process of communicating ideas, vigorously protest this exercise of censorship." Nordstrom collected 425 names, which was impressive because she had sent the press release to only 380 recipients. 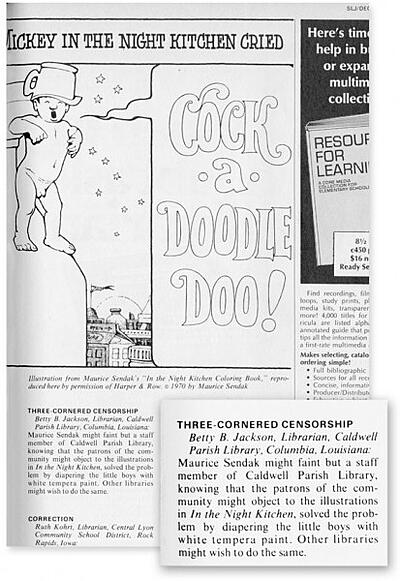 That same year, at the ALA Midwinter Conference, the Children's Book Council brought the situation to the attention of the ALA Intellectual Freedom Committee. The committee immediately determined that the act of censoring even a part of a book violated the Library Bill of Rights. The ruling helped librarians to avoid being pushed into other, similar acts of purportedly partial censorship.

But how many librarians actually took Jackson's suggestion to paint diapers on Mickey? The ALA's Office for Intellectual Freedom recorded only one such case. In 1977, the director of curriculum development in Springfield, Missouri hired an artist to draw shorts on Mickey in 40 copies of In the Night Kitchen. The books were then distributed to kindergarten students. The director claimed that covering Micky was the only way the school would be able to use the book.

For his part, Sendak claimed that other librarians sent him expurgated copies of In the Night Kitchen over the years. He also spoke openly about the entire episode in 1991, in a speech he delivered at the American Booksellers' Convention. Sendak called the speech "Why Mickey Wears No Pants," and the Los Angeles Times ran a complete transcript.

When Sendak passed away, retrospectives and obituaries glossed over the fact that In the Night Kitchen had been a Caldecott Honor book. Instead, they more likely echoed the Washington Post obituary said, "The book's full frontal nudity of the protagonist was considered shocking at the time, and librarians chose to draw diapers over the offending scene." Other periodicals offered similar exaggerations; Forbes even reported that "librarians across the country" had censured the book. Thus a few isolated incidents were magnified into a national phenomenon.