Best-selling crime novelist Mickey Spillane was born on March 9, 1918. Born Frank Morrison Spillane in Brooklyn, New York, he was the only child of his Irish bartender father, John Joseph Spillane and Scottish mother Catherine Anne. Spillane was brought up in the tough neighborhood of Elizabeth, New Jersey. Under the tutelage of his mother, he grew up “less tough,” reading Melville and Dumas before he was even eleven years old. 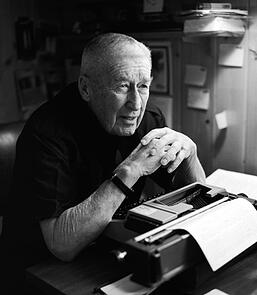 After high school, Mickey, as he became known, went on college in Kansas where he briefly starred on both the football team and the swim team. However, he never actually graduated and by 1940 was working part time in a New York department store. While working in the department store, Spillane met an editor for Timely Comics who was looking for someone to write short pieces for the magazine. Spillane began working as a freelancer, but in the aftermath of Pearl Harbor joined the US Army Air Corps.

Spillane served his time as a flight instructor in Mississippi, where he met his first wife, Mary Ann Pearce. After the war, the couple returned to Brooklyn and Spillane again began work as a comic book freelancer. He created a tough, hardnosed private eye named “Mike Danger.” Unfortunately, Danger failed to sell, which led Spillane to leave the world of comics and pursue crime fiction. He retooled Danger and named him Mike Hammer. Mike Hammer is a character whose every case turned into a personal vendetta that ended in Hammer serving up his own double-barreled justice, though undoubtedly after a requisite number of trysts with beautiful and generally willing women. 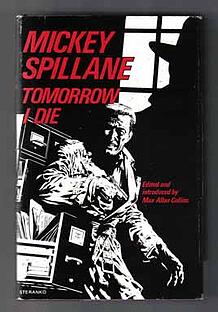 He wrote the first Hammer book in a period of three weeks, which his friend and editor from Timely comics, Ray Gill, helped him sell to EP Dutton & Co. The editors there were not sure the lurid books were of the highest caliber, especially when it came to their writing style, but were willing to give it a shot. Clearly their risk was worth it. By 2006, when Spillane passed away at age 88, he left behind 26 titles and over 200 million in books sold, not to mention his wife Jane Rodgers Johnson, two ex- wives, and four children. Spillane remains a beloved writer of crime fiction.

Many critics make fun of Spillane’s writing, but no one can deny his success. While phrases like “he took off like a herd of turtles,” from I, and the Jury, are comical at best, it is as he said: “Those big-shot writers could never dig the fact that there are more salted peanuts consumed than caviar.”