No one denies that the Nobel Prize in Literature has a political bent. It is, for instance, widely believed that playwright Harold Pinter’s 2005 victory was meant to commemorate the slow decline of the Thatcher-Major era in Great Britain. While the Nobel committee’s insistence that writers be honored for their ‘idealism’ has yielded snubs for James Joyce, Vladimir Nabokov, and Henry James, it has leveraged that same commitment into recognition for such overtly political poets as William Butler Yeats and Czeslaw Milosz. It would be easy, in light of all this, to color Nobel Prize winner Seamus Heaney as a predominantly political poet. He was, after all, a prominent voice for peace (among other things) during the Troubles in Ireland. To pigeonhole Heaney thusly, however, would be to do a huge disservice to one of the last century’s most accomplished poets.

Seamus Heaney has always had a complex relationship with the political. The author of such beloved collections as The Haw Lantern (1987) and Human Chain (2010) has from his earliest works taken a very personal view of the Irish conflict. Fast forwarding to his Nobel Lecture, ‘Crediting Poetry,’ more than forty years after his first poems were published, the poet lauds the capacity of poetry (Yeats’ in particular) to be both “equal to and true at the same time” (a reference to Archibald MacLeish’s dictum that poetry “should be equal to/not true). A great poem, for Heaney, can access truth, whether it be political or otherwise, through aesthetic beauty. Meanwhile, critic Blake Morrison suggests that Heaney has “shown signs of deeply resenting this (political) role.” For a Northern Irish, working class, mid-century family, the personal can become deeply political, but that doesn’t mean one has to like it.

That Heaney has won not just the Nobel Prize, but each and every major award for poetry from the T.S. Eliot Prize (named, of course, for one of Heaney’s fellow laureates) to the PEN Translation Prize in 1985 for his edition of Old English epic poem Beowulf, strongly suggests that whatever balance the lauded wordsmith has struck between the personal and the political is a winning one. Upon his death in 2013, Heaney was eulogized not just by the literati but by presidents (Bill Clinton), universities (Harvard, Emory, and Oxford, at each of which he taught), and, frankly, entire nations (the people of Northern Ireland had, by then, taken to calling him, affectionately, ‘Famous Seamus’). So many and enthusiastic were the fans of Heaney's poetry, that they were given the moniker ‘Heaneyboppers,’ a reference to the teenyboppers of yore.

One of Heaney’s most-cited and most-loved poems, ‘Digging,’ from his first collection, Death of a Naturalist (1966), may provide some insight into the role of poets and poetry as Heaney sees them. The closest thing the writer ever produced to an aesthetic manifesto, the poem recalls his father and grandfather cutting turf in bogs and digging for potatoes, ending with the career-sparking declaration, “But I’ve no spade to follow men like them./Between my finger and my thumb/The squat pen rests./I’ll dig with it.”

The great poet makes it clear that his is a continuation of his father’s vocation: a hard-fought struggle for sustenance, a backbreaking and unfinishable endeavor. But he does not see himself as trading up. He writes, rather, because he ‘has no spade.’ Poetry, he seems to suggest, abhors a vacuum, and must suffice where other things are lacking, from garden implements to peace and enlightenment. Even the fact that the pen rests ‘between’ his fingers, rather than upon, evokes a certain liminality; a propensity to permeate the impermeable.

An addendum to thi 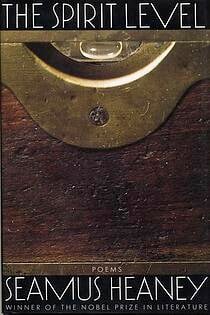 s aesthetic proclamation might be found in a poem published thirty years later in The Spirit Level (1996), entitled, fittingly, ‘Postscript.’

“Known and strange things,” its final lines read, “pass/as big soft buffetings come at the car sideways/and catch the heart off guard and blow it open.” Not only do Heaney’s poems fill the vacuums they meet, but they blow the heart open. Where they are political, they are so only to prevent a hardening of the heart. They create and preserve the vulnerability, the permeability, of the human soul and with that permeability comes the opportunity for true contact. This was the only opportunity Heaney’s poetry would ever need to work its way into the hearts and minds of nearly half a century of readers.