Wislawa Szymborska won the Nobel Prize in 1996 "for poetry that with ironic precision uncovers the laws of biology and historical mechanisms in fragments of human reality." Indeed, irony is a point of distinction in her work. Her poems are at once simple and yet complex. They are told engagingly from diverse perspectives, and are consistently endowed with her distinguished wit and cleverness.

Szymborska was born in Poland on July 2, 1923--one of the 20th Century's most inauspicious times and places. When living in Krakow at age sixteen, the armies of Nazi Germany invaded. Szymborska survived World War II working as a railroad employee to avoid deportation to Germany. After living through the biggest conflagration of the century, it is not surprising that history is a central theme in her work. But her oeuvre is not one of a typical World War II writer. Szymborksa's life was also defined by existing on the outside of the war, whether taking classes in secret or hiding from Nazi attention.

This life of ironic contradiction, living at once in the epicenter of a tempest and on its fringes, informs Szymborska's delicate treatment of frequently neglected poetic subjects. When the world and its apparent order become disturbed, simple and everyday matters are the most comforting. In her poetry, Szymborska writes from the voice of a cat whose owner has left, and finds an artistic muse in the splitting of a sea cucumber. 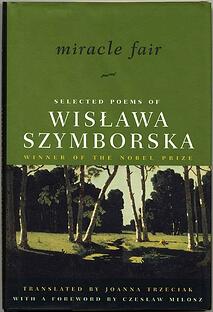 A preoccupation with the overlooked distinguishes Szymborska's career. Not only is her attention turned to contemplative house pets, but to the souls neglected by memory and textbooks. In her collection Miracle Fair, in one of the finest lines about war in 20th Century literature, she writes: "History counts its skeletons in round numbers. / A thousand and one remains a thousand, / As if the one had never existed."

Szymborska's careful attention to her poetic subjects not only rejuvenates our treatment of the mundane and lends a voice to the voiceless, it asserts the power of her very medium. Many of the poet's pieces are dedicated to the joy of writing and poetry. She was known to lament a decreasing cultural interest in her art form, and became one of poetry's most captivating advocates. Never, she insisted, must we forget that the miraculous can be found in the smallest of places.