O.J. Simpson's If I Did It: The Road to Publication

Born on July 9, 1947, O.J. Simpson is 72 years old today. We thought his birthday was a fitting day to revisit the interesting publication history of his notorious "tell-all", If I Did It, so we're republishing our post on it here.

We are always fascinated by a book’s road to publication. From its author’s efforts to get his or her story on paper, to its editor’s work, to the actual publishing of the book, it’s a nuanced process, filled with highs and lows. O.J. Simpson—the most notorious subject in a criminal trial in the last century—penned If I Did It (with the help of a ghost writer), and the book’s publication history is an interesting one, making first editions highly collectible.

It’s easy to assume that any book written by the alleged criminal, ex-NFL player, and Heisman trophy winner would garner substantial interest. However, If I Did It, Simpson’s hypothetical tell-all about the murders of his ex-wife Nicole Brown Simpson and her friend Ron Goldman, is an special case.

The criminal and civil trials took place in 1995 and 1997, respectively. The criminal trial was the most widely publicized in history. Not only was Simpson a public figure, but when he was supposed to turn himself in, he ended up leading police on a slow-speed chase in his now legendary Ford Bronco. Every major news outlet interrupted coverage of the NBA Finals—which reached millions of people—to broadcast the car chase.

By the time Simpson went on trial, the country was spell bound. Issues of race and police behavior took center stage, woven throughout the defense and prosecution’s best efforts to argue their cases. Most everyone knows the outcome: the jury found Simpson not guilty in his criminal case, but he was found unanimously responsible in the civil lawsuit and ordered to pay $35 million to the families.

When Simpson started promoting his new book If I Did It with a publicity tour, recording an interview with Fox, and teasing his story as the one “the whole world got wrong”, the backlash was fierce.

Obviously the subject matter is incredibly sensitive for the Brown and Goldman families. In response to the book’s forthcoming publication and the scheduled TV interview, Fred Goldman, Ron’s father, told ABC News, “He destroyed my son and took from my family Ron's future and life. And for that I'll hate him always and find him despicable."

The public, too, was outraged at the thought of Simpson profiting from such a tell-all and at his  audacity in writing a book titled If I Did It when so many believed that there was no “if” in the equation—many believed that he did do it.

When faced with these outside pressures, News Corp. panned both the book and the airing of the TV interview. In a statement, Rupert Murdoch, chairman of News Corp., said, “I and senior management agree with the American public that this was an ill-considered project."

In response, the publishing industry was in shock. An article in the Washington Post noted that “a book's removal simply for objectionable content is virtually unheard of” and the cancellation “was an astonishing end to a story like no other.” 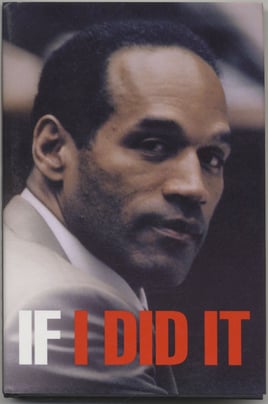 However, that wasn’t the end. In 2006, after the cancellation of the TV special, ReganBooks, a division of HarperCollins, who was set to publish the book, destroyed nearly all of the first edition copies. Copies that survive are very rare and extremely collectible. First editions with in-tact dust-jackets (see photo) and in fine condition throughout will fetch a sum of several thousand dollars.

Judith Regan, the prospective publisher, was criticized for her role. In an article published in Vanity Fair, James Wolcott goes so far as to say, “the ghoulish sanctimony of Judith Regan's entrepreneurial gusto that attended it” was part of the “banal horror” of the book.

When the book’s publication was cancelled, Regan published an 8 page defense titled “Why I Did It” in which she states, “I made the decision to publish this book, and to sit face to face with the killer, because I wanted him, and the men who broke my heart and your hearts, to tell the truth, to confess their sins, to do penance and to amend their lives...I contracted through a third party who owns the rights, and I was told the money would go to his children. That much I could live with." Regan was fired by HarperCollins in December of 2006.

Despite its initial cancellation, Simpson’s hypothetical tell-all did eventually make its way into the mass market. In 2007, the Goldman family published the book under a new title: If I Did It: Confessions of the Killer. The family had been awarded rights to the book and decided to publish it. As the alternate title suggests, they believed it to be Simpson’s confession. The sales of the book went toward collecting some of the $35 million the court ruled that Simpson owed.

Whatever you believe about O.J. Simpson, the making of this book proves supremely intriguing. From the events themselves, to the publicity of the case, to Simpson’s “press” tour, to the canning of the book and TV special following public outcry (the TV special was finally aired earlier this year), to the canning of the publisher, to the eventual publication of the book with profits going to the victim’s family, If I Did It is unlike anything that’s been written or published before.