Oliver Goldsmith: Not Quite a Goody Two-Shoes

Despite his tendency to attract biting "compliments," such as Horace Walpole's description of "an inspired idiot," Oliver Goldsmith left his mark on the literary world as a poet, novelist, and playwright. He is not credited with starting a movement among his peers, but no one could label him as a follower. He is most famous for his novel The Vicar of Wakefield, one of the most widely read novels of the Victorian era. The book is widely referenced in British literature - from Charles Dickens' Tale of Two Cities to Jane Austen's Emma and George Eliot's Middlemarch - and continues to hold literary significance today.

Goldsmith's exact birth date and place are unknown, but some records indicate it probably occurred around 1730 in Ireland. He had five living siblings, and his father, Charles Goldsmith, was a clergyman.

Goldsmith began his formal education at age seven, attending a local school run by ex-soldier Thomas Byrne. Goldsmith struggled socially and endured teasing because of his short height and facial scars caused by smallpox. His teachers did not make life easier for him, and he often found himself wearing the dunce cap. Still, he found enjoyment in his studies, especially when he was writing or learning about Celtic culture.

Goldsmith continued his education at Trinity College, in Dublin, studying theology and law. These subjects did not interest him, and he spent more time causing trouble on and off campus than he did attending classes. In 1747 he was suspended with four of his classmates after causing a riot at Marshalsea Prison.

When Goldsmith graduated in 1749, he was at the bottom of his class with no job prospects. He was denied ordination by the church, and his attempts at starting a career in law or medicine failed quickly. In 1756, Goldsmith began to travel through Italy, Switzerland, Germany, France, and England. Many speculate that his poem, The Traveller, was inspired by these journeys. During this time, he earned a living by working temporary jobs and sometimes playing the flute in exchange for a room or a meal. Eventually he settled in London, where he worked several jobs and began writing to pay off massive gambling debts. 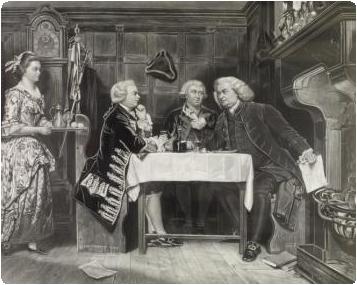 It was in London that Goldsmith met Samuel Johnson, who became a lifelong friend and co-founder of an exclusive dining club, known simply as "The Club." Other members included Joshua Reynolds, Edmund Burke, and John Hawkins.

Goldsmith was not always eager to take the credit for his literary works. In the beginning of his writing career, he used the pen name "James Willington," which was the name of old classmate from Trinity. Sometimes he wrote anonymously. Although one of his most famous works, The History of Little Goody Two-Shoes, is largely attributed to him, he never claimed it as his own. John Newbery published the book in 1765 without providing the name of the author. Goldsmith wrote children's books for Newbery as one means of paying off the gambling debts he frequently incurred.

Goldsmith passed away while still in his 40s, possibly after a failed self-diagnosis of a kidney infection. He left behind a legacy of both impressive talent and shameful foolery. He was buried in London, and a monument was erected for him in Westminster with an epitaph composed by his dear friend Samuel Johnson. It reads:

A Poet, Naturalist, and Historian,
Who left scarcely any style of writing untouched,
And touched nothing that he did not adorn;
Of all the passions,
Whether smiles were to be moved or tears,
A powerful yet gentle master;
In genius, sublime, vivid, versatile,
In style, elevated, clear, elegant—
The love of companions,
The fidelity of friends,
And the veneration of readers,
Have by this monument honored the memory.