Orson Welles and the "War of the Worlds" Broadcast: A Nation Duped?

In the decades since it first aired, Orson Welles' "War of the Worlds" broadcast has become infamous - even called the most notorious radio hoax in history. NPR reported, "The United States experienced a kind of mass hysteria that we’ve never seen before." But was the event really so shocking? Evidence points to a different hoax - one perpetuated not by Welles, but by newspapers attempting to discredit radio as a trustworthy news source. 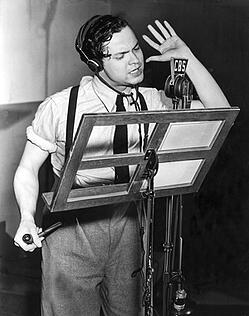 On the eve of Halloween 1938, unsuspecting audience members listened to The Mercury Theater, a radio show directed and produced by future filmmaker Orson Welles. The show performed an adaptation of H.G. Wells’ novel The War of the Worlds (1898) but the first 2/3 of the radio show was presented as a series of news bulletins designed to simulate the events of an alien invasion in progress. Although there was a disclosure at the beginning of the show, anyone who tuned in afterwards would have heard a realistic report of an alien assault. Supposedly, upwards of one million Americans were convinced that the events were true.

After the broadcast, the public reaction was overwhelming. A mayor called reporting mobs taking over the streets in his town. Paul White, the head of CBS news, described the aftermath:

The telephone switchboard, a vast sea of light, could handle only a fraction of incoming calls. The haggard Welles sat alone and despondent. "I'm through," he lamented, "washed up." I didn't bother to reply to this highly inaccurate self-appraisal. I was too busy writing explanations to put on the air, reassuring the audience that it was safe. I also answered my share of incessant telephone calls, many of them from as far away as the Pacific Coast

However, was it as big of a scare as is commonly believed? In 2003, historian Joseph Campbell wrote, "The panic and mass hysteria so readily associated with 'The War of the Worlds' did not occur on anything approaching a nationwide dimension." In fact, when the radio staff left the building - after having been held there on lockdown - they were surprised to see that the streets were quiet, that there was no evidence of panic at all.

So, why the rumors of widespread terror?

Newspapers. During the depression, radio began to siphon off advertising revenue that had traditionally belonged to print sources. After Welles' program, newspapers seized the opportunity to discredit radio broadcasting. They argued that if radio could not be regulated and was managed in an irresponsible manner, then it should not be trusted. The New York Times, published an article “Terror by Radio” in which it admonished radio officials for approving the interlacing of “blood curdling fiction” with breaking news alerts “offered in exactly the manner that real news would have been given.”

It seems impossible that one million people heard the "War of the Worlds" broadcast. The C.E. Hooper rating service telephoned 5,000 households for its national ratings survey the night of the program. Of the 5,000 called, only 2% of the surveyed audience reported listening to a “radio play” or “the Orson Welles Program,” and no one reported listening to a “news broadcast.” The Welles show was scheduled against the most popular national program, ventriloquist Edgar Bergen’s Chase and Sandborn Hour, a comedy variety show. In fact, CBS commissioned a nationwide survey the day after the broadcast, and network executives were relieved to discover just how few people actually tuned in. The broadcast was undoubtedly shocking, but not on the scale previously assumed.