Philip Roth, Philip K. Dick, and the Man in the High Castle

What would our world look like if the Axis powers had won World War II? How would our daily lives have been transformed if the United States had been sympathetic to Nazi Germany? Posing “what if” questions about World War II and its aftermath has been popular among some of America’s most widely read authors. Notably, both Philip K. Dick and Philip Roth have imagined alternate histories in which Nazi Germany won the war. While the series The Man in the High Castle takes its title and storyline directly from Dick’s novel of the same name, we’d like to explore the literary precursors to the show and to consider the ways in which writers wield great power in the writing (and rewriting) of our histories. 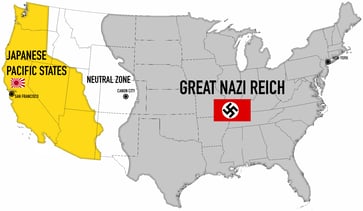 Reimagining history through literary fiction is not something new. To be sure, historical events—seeming facts—have been fictionalized and reinterpreted for centuries by novelists, playwrights, and poets. But creating an alternate history of World War II, given the recent nature of the chasm that many say divided the twentieth century, is perhaps a more complicated one. By most accounts, Philip K. Dick was the first to imagine a world, in novel form, in which Nazi Germany prevailed and defeated the Allies in World War II. That novel, The Man in the High Castle (1962), is said to have taken inspiration from other texts that re-envisioned previous historical events. Yet an alternate history of World War II must have felt more dangerous, more immediate, less than twenty years after the war actually ended.

Dick’s novel begins fifteen years after World War II officially ended in 1945. Yet the world in which the novel places us is one in which the Axis powers won the war, with Nazi Germany occupying the “Eastern States” and Imperial Japan occupying the “Western States.” In the Nazi-run Eastern States, in particular, characters live within a seemingly racist, anti-Semitic totalitarian sphere in which Nazi ideology has been almost fully realized.

Philip Roth’s The Plot Against America (2004) 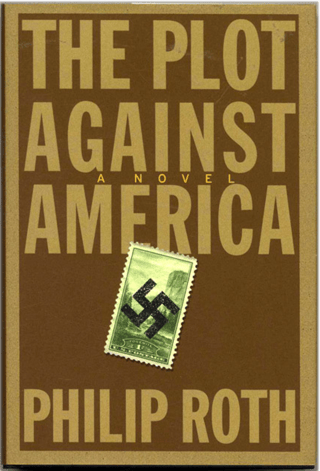 More than 40 years after Dick published The Man in the High Castle, Philip Roth imagined a mid-twentieth-century world in which Franklin Delano Roosevelt lost the 1940 election to Charles Lindbergh, an anti-Semitic Nazi sympathizer. That novel, The Plot Against America (2004), brought renewed interest in the World War II era and the “what ifs” of Nazism and totalitarianism.

Unlike in Dick’s novel, however, the Allies still win the war. However, the text serves as a reminder that the gross injustices of World War II, largely the anti-Semitic murderous ideology of the Third Reich, are not limited to one particular historical moment. Discussing the continued significance of the novel, Richard Brody explains that The Plot Against America is ultimately about “how it can happen here; about how, if it were to happen here, American Jews and, for that matter, many other courageous Americans would rise up, organize, and resist; and about how altogether American resistance against an altogether American abuse of power might nonetheless not suffice.”

Through different literary modes, Dick and Roth are asking similar questions: what if World War II had turned out differently? What if American involvement in World War II had looked different? In 2015, Amazon released a television series entitled The Man in the High Castle, adapted largely from Dick’s novel but picking up on threads from Roth’s novel, as well.

Ultimately, the questions with which we are left concern the extent to which we are willing to endure violence against the so-called Other, and whether our resistance efforts in the face of tyranny can ever be sufficient. Or, worse yet, what if we’re complacent? Whether we’re building a history books collection, reading one of the novels we mentioned, watching the television adaptation, or perhaps putting together a WWII book collection, we’re reminded that another moment of tyranny could be lurking.