Gustave Flaubert was born on December 12, 1821. He is known for his style, aesthetics, and perfectionism, and he appeals to both romantics and realists. Sometimes writing only one page per week, Flaubert took five to 25 years to complete each novel. The result was worthwhile: Flaubert is regarded as one of the best Western writers of all time. 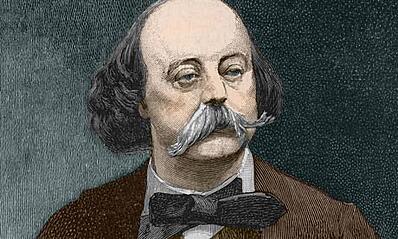 Born into a family of doctors in the town of Rouen, Flaubert had epilepsy but was never diagnosed or treated for it. He found his way to writing and literature at an early age, perhaps because of his fragile health.  His earliest writings were Memoirs of a Madman (1838), his autobiography, and the novella November (1842), which wouldn't be published until years after his death. 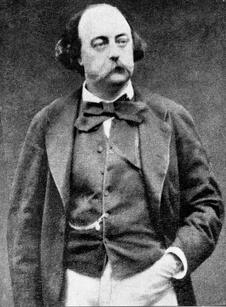 Flaubert left his beloved hometown when he was 21 and went to Paris to study law. He disliked the city but made several acquaintances, among them Victor Hugo, Emile Zola, and his long-time married lover, poet Louise Colet.  It was either his seizures or father's death, or both, that prompted Flaubert to leave his law studies and Paris, and move into a home on the Seine with his mother in Croisset, near Rouen.

In 1846, Flaubert traveled to Brittany with his closest friend, Maxime du Camp. From 1849 to 1850, they traveled to Turkey, Greece, Egypt, and the Middle East. Flaubert wrote about his visits to brothels in his correspondence, and added venereal diseases to his list of health problems.

When Flaubert returned from the trip in 1850, he began to write The Temptation of Saint Anthony and Madame Bovary. He described details of his progress in years of letters to Colet. Madame Bovary was published as a serial in Revue de Paris in 1857. The French government charged the author and publisher with immorality, but were both acquitted. When it was later published as a novel, it was a best seller.

The Temptation of Saint Anthony was also published in pieces, but would not be completed for another two and a half decades.  In 1858, Flaubert visited Carthage to study archeology in preparation of writing Salammbo, published in 1862, followed by Sentimental Education, published in 1869.

The War of 1870 wore on Flaubert's nerves and he was worn down further still when he lost his mother in 1872. His niece Caroline looked after him, and he maintained correspondence with friends, including the writer George Sand, but his health and nerves made him an unhappy man.

His next work, 1874's Le Candidat, was unsuccessful, but he finally finished The Temptation of Saint Anthony that same year.  He then began working seriously on Bouvard et Pécuchet, although he had conceived the idea almost ten years earlier. He took a break to write Three Tales, published in 1877. Bouvard would be published posthumously in 1881, though it was not the masterpiece Flaubert had hoped. He died of a stroke at age 58 in 1880.

One lighter posthumous note was his satirical encyclopedia Dictionary of Received Ideas, in which he mocked cliches and bourgeoisie absurdities, published in 1911.