One could say Evelyn Waugh was something of an early 20th Century Anthony Bourdain. A novelist, essayist, biographer and travel writer, Waugh (1903-1966) was a renowned world traveler and played witness to some of the more seismic events of his era: the fall of the British Empire throughout South America, World War II, the struggles of a post-war Europe, and the emergence of the United States as a world superpower. All of these things Waugh maintained strong views upon and chronicled in his writings, both fictive and non. Perhaps his most well-known endeavor, Brideshead Revisited, is our subject today. 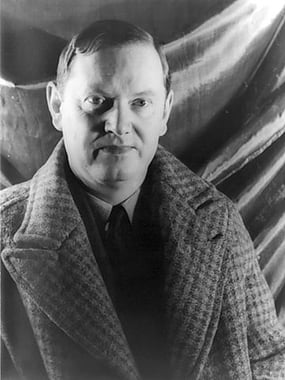 A complicated, somewhat tortured man by all accounts, Waugh’s life was populated with disappointment in his own education and military service, several marriages, and an intense reformation and conversion to Catholicism in the early 1930s. He was a man known for his biting wit, incisive satire, and somewhat toxic mixture of arrogance and self-depreciation.

While much of Waugh’s life has the ability to astound, perhaps it’s not so astounding that his most notable and influential work, the 1945 novel Brideshead Revisited: The Sacred and Profane Memories of Captain Charles Ryder, was the piece he was least proud of, at least according to a letter Waugh wrote to writer Graham Greene in 1950 in which he said: “I re-read Brideshead Revisited and was appalled.”

The novel centers on the life of the titular character and his journey from prep school to university to world traveler, and finally his ultimate demise as something of an exiled loner drifting through the battered remains of English during the tail-end of World War II.

While astute readers know much of the novel was informed by Waugh’s own life, here are three things readers may not know about Brideshead and its creator.

Though Waugh was very critical of the novel following its publication, Brideshead left an indelible mark on readers the world over — one that still resonates today. It’s satire of English class and socioeconomic structures, and its bravery in dealing — albeit subtly — in topics such as homosexuality, have left critics to uphold the novel decade in and decade out as a masterpiece of its time. In 2005, Time Magazine named Brideshead as one of the 100 best English-language novels from 1923 onward, and in 2009 Newsweek selected it as one of the 100 best books of world literature.

2). Waugh wrote first wrote Brideshead in his head and then penned it during WWII.

The lion’s share of the novel was written while Waugh was an active-duty member of the British military from 1943 to 1944. After sustaining an injury to his fibula during a parachute training exercise following the Allied Forces invasion of Sicily in 1943, Waugh was remaindered to the small town of Chagford, Devon in order to recuperate. Once there, Waugh requested three months leave in order to finish the novel, even though much of the story had already been envisioned months before while Waugh served in several hotly-contested regions throughout England and Europe.

Published to nearly universal acclaim in 1945, Brideshead has been the basis for several adaptations for both television and film. A television series of the same name was produced in 1981 for Britian’s ITV and starred Jeremy Irons as Charles Ryder. The 11-episode serial received much critical acclaim for its attention to period details and adherence to Waugh’s original text, and its success likely encouraged the making of a film version of the novel, released in 2008 and featuring Matthew Goode and Emma Thompson in principal roles. The film adaptation saw less critical success than the television serial, particularly for its somewhat truncated nature and divergence from Waugh’s 1945 novel.