Russian poet, novelist, and translator, Boris Pasternak was born in Moscow, Russia on February 10, 1890. His father, Leonid Pasternak was a post-impressionist painter and professor at the Moscow School of Painting, Sculpture, and Architecture; his mother, Rosa Kaufman was a concert pianist. Growing up in a household rich with artistic influence, it is only natural that he would follow in his parent’s footsteps. In 1904, Pasternak took up musical composition. However, he abandoned these studies to attend the University of Marburg, Germany and focus on a career in philosophy. He only spent a few months at university, travelled to Italy, and returned home to dedicate himself to literature. 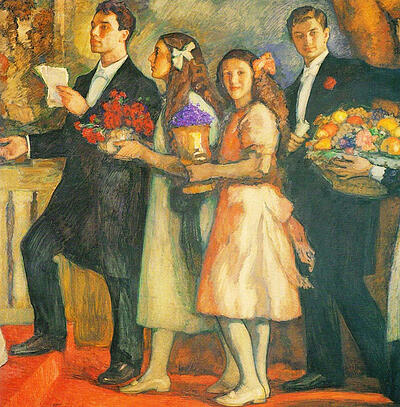 Painting by Leonid Pasternak of his children: (From left to right) Boris, Josephine, Lydia, and Alexander

Pasternak fell in love with Ida Vysotskaya, daughter of a high-class tea merchant. Although the Pasternak family had strong ties with the artisan community, Vysotskaya’s parents were not thrilled with the idea of their daughter marrying a man with an uncertain future, forcing her to decline his proposal.

Pasternak remained in Moscow during World War I, publishing his first poetry anthology that year. Due to an injury he received as a child, Pasternak was unable to serve in the army and worked in a chemical plant, which provided much of the background knowledge for a novel he would publish much later, Dr. Zhivago.

Following the October Revolution of 1917, most of Pasternak’s family and friends left Russia. He continued to write, but publishing was becoming near impossible due to the censorship the Soviet Union was placing on Russian literature. He wrote Themes and Variations and My Sister, Life in 1917, but the works weren't published until years later due to the war. Pasternak's second failed relationship inspired My Sister, Life which quickly made him one of the greatest writers of his time.

His writing was laced with alliteration, rhythm, rich vocabulary, and allusions to great writers such as Lermontov and Rilke. Pasternak paved the way and set new standards for young Russian writers. He also married Evgeniya Lurye with whom he had his first son, Evgeny Pasternak, in 1923. 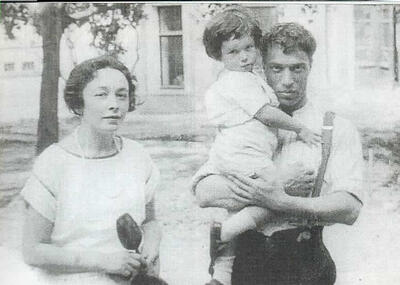 The early 1920s proved to be a promising time for Pasternak, though this quickly changed with the authoritarian government. Pasternak firmly believed that art should be a portal to the soul and should reveal the self, while the government regarded art as a means to promote political ideals. He was criticized and considered selfish for not endorsing the whole. This isolation he received from his audience was devastating, not only for Pasternak but other artists as well. In addition facing his own depression and internal battles, he would later lose two of his dear friends, Marina Tsvetaeva and Paolo Iashvili, to suicide.

More changes arose for Pasternak after leaving his first wife for Zinaida Neigauz, who inspired the last of his optimistic works Second Birth (1932) and Safe Conduct (1931). He was soon forbidden to have his own works published and took to translating classic writings such as Shakespeare, Rilke, and Verlaine. He was successful with this, and his translations of Shakespeare are still used in Russia.

During World War II Pasternak published two of his poetry collections. In this time, Neigauz’s son from a previous marriage passed, leaving Neigauz listless and withdrawn. Pasternak began to look for companionship elsewhere and years later he met Olga Ivinskaya, who restored Pasternak’s resilience. She was the muse for Lara in Dr. Zhigavo and for the love poems he wrote later in his life.

Dr. Zhivago was completed in 1956, but it was rejected by Soviet publishers due to its “anti-Soviet” content. Once Western eyes caught sight of the manuscript, it was smuggled to Milan where it was published. Publisher Feltrinelli felt it was a greater crime to refuse publishing this masterpiece.

It was rumored that Pasternak was nominated for a Nobel Prize after WWII and it was discussed from 1946 to 1950 and again in 1957. He was finally awarded in 1958--but turned the prize down due to threats of imprisonment and excommunication.

He was overwhelmed with honor and pride to be considered for the award. After it was known that he was going to be presented with the award for Dr. Zhivago, anti-Pasternak campaigns arose, demanding that he 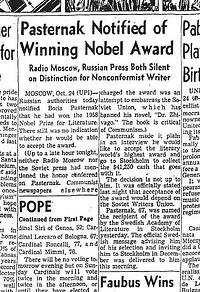 be exiled from the Soviet Union for the poor light he shone over his country. He was scared of endangering the lives of his loved ones and sent a telegram to the Nobel Committee explaining that he would not be able to go to Stockholm to receive his award. Pasternak was torn that the country he loved would reject him and this ongoing stress and humiliation he received impaired his health.

In 1960, Pasternak passed away from lung cancer and thousands of his admirers travelled, risking harassment and arrest from the militia and the KGB, to attend his funeral service.His last works reflected on life, love, and a life after death. When the Weather Clears was his last complete work published. Pasternak was reinstated into the Union of Soviet Writers in 1988, making the publication of Dr. Zhivago possible in the Soviet Union. His son, Evgenii accepted the Nobel Prize in his honor in 1989.