Shirley Ann Grau and the Importance of Place in Literature

The setting of a novel or a short story often goes a long way in securing its readership. And the act of describing setting is an art form. Include too much detail and readers are, at best, overwhelmed and, at worst, bored. Include too little detail and readers are lost and confused. Finding the sweet spot when it comes to describing place and setting sets a good writer apart from a great one. Shirley Ann Grau is one of the greats.

Shirley Ann Grau was born in New Orleans, Louisiana on July 8, 1929. She spent her early years living in both New Orleans and Montgomery, Alabama. These southern settings formed the basis for much of her written work. Although themes in Grau’s writing stretch to include other important matters, most apparently women’s rights and the role of the family, the focus that she puts on place allows readers to see the intricacies of the region she describes. As a result, Grau draws us in and makes us feel like we are journeying right along side her characters.

For example, in Grau’s first novel, The Hard Blue Sky (1958) she documents the life of an isolated island people off the Gulf of Mississippi. The setting of the small locale — the Isle aux Chiens — is described exquisitely from the start:

The land itself rises slowly from the brown sand beach on the south to the little shell ridge overlooking the back bay. There is a heavy bank of oak trees that begin just beyond the sand and an irregular line of very tall palms. (One comes down almost every September in the storms but there always seem to be plenty left.) Under these trees are the houses…

And the life of the fisherman who live on the island pours forth onto and interwoven with this backdrop. It is integral to the storyline. Even in this little snippet, we get a clear picture of the lay of the land and are introduced to how significant hurricane season is for the islanders. Truly, as author Philip Hensher asserts, “the spirit of place in a novel is not just an inert backdrop or a straightforward illustrator of emotions; it is part of the humanity at the centre of the endeavour.”1 Grau’s efforts affirm Hensher’s point. 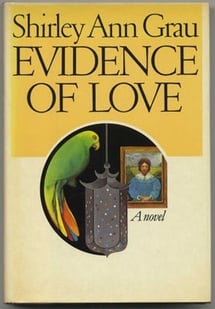 In many of her other works, including The Condor Passes (1971) and Evidence of Love (1977) we are treated to further glimpses of a southern setting and its impact on the characters in each story. For this reason, as Maria Herbert-Leiter posits, Grau’s fiction holds an important place in the study of Louisiana history.2

The importance of place in literature can be noted in numerous examples. Grau’s southern counterpart, William Faulker, uses place impeccably in his works. Faulker’s Yoknapatawpha County is made remarkably real to us as readers, not only because it is based on Lafayette County, Mississippi. Beyond that, Faulker writes it in such a way that the elements of place are crucial to the elements of his characters. The river in As I Lay Dying comes to mind. As the Bundrens attempt to cross it, we gain a keener insight into their life, fate, and individual perspectives.

While we're talking about southern settings, we'd be remiss not to mention Flannery O'Connor. Grau, Faulkner, and O'Connor form a sort of southern-setting-trifecta, and the three would make a great jumping off point for a southern literature collection.

Of course place is an essential element in many of the great pieces of literature: Tolkien’s Middle Earth, J.K. Rowling’s Hogwarts, etc. We wonder what you think. Is setting, as Hensher argues, the first thing that comes to mind for you when you think of your favorite novel or story? Before even plot or, sometimes, characters?

It’s undeniable that place plays a huge role, but tell us, how significant is the crafting of a good setting to you as a reader and as a collector?