In 1853, industrialist and social reformer Robert Owen witnessed a seance by American medium Maria Hayden. The experience convinced him of the existence of an afterworld and the ability of the dead to communicate with living. Hayden had converted Owen to Spiritualism. Owen was not the only leading figure to embrace Spiritualism; years earlier, Alfred Russel Wallas, who co-discovered the theory of evolution, wrote a book called Miracles and Modern Spiritualism (1896), and British Prime Minister Arthur Balfour became a member of the British Society for Psychical Research, founded in 1893.

A Movement with Great Momentum

Plenty of famous authors, from Edward Bulwer-Lytton and Elizabeth Barrett Browning, to Lewis Carroll and Rudyard Kipling participated in seances and other spiritual rituals. Others believed that spiritualism was a farce, particularly Charles Dickens, who wrote numerous articles on the subject in Household Words. Alfred Lord Tennyson famously announced,“I am convinced that God and the ghosts of men would choose something other than mere table-legs through which to speak to the heart of man.” Despite this intellectual divide, spiritualism flourished. 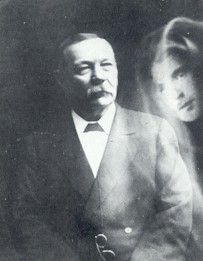 One of its most avid proponents was Sir Arthur Conan Doyle. His character Sherlock Holmes may have been methodical, skeptical, and rational, but Conan Doyle himself was not. He became interested in Spiritualism as early as 1866, when he read a book by US High Courts Judge John Worth Edmunds. One of America's most influential spiritualists of the day, Edmunds had spent time with the Fox sisters, better known as the "Rochester knockers" for their noisy system of communicating with spirits. Edmunds himself claimed to have communicated with his wife after she died.

Conan Doyle appreciated Edmund's descriptions and sought his own spiritual experiences. A practicing physician, Conan Doyle called on General Drayson, a teacher at Greenwich Naval Academy. There he participated in a table turning that thoroughly convinced him of telepathy.

When the British Society of Psychical Research was founded in 1893, Conan Doyle was one of the earliest members--along with many other illustrious thinkers and prominent scientists. At the time, spiritualism had yet to be classified as either science or religion, and the organization conducted experiments to investigate the existence of paranormal phenomena and to corroborate the claims of spiritualists.

After several experiments, Conan Doyle decided that telepathy, which he called "thought transference" was a real phenomenon. By this time quite famous thanks to Sherlock Holmes, Conan Doyle resolved to leave fiction writing behind and devote himself to the study of spiritualism.

In 1917, Conan Doyle gave his first public lecture on spiritualism. The following year, he toured the major cities of Great Britain to speak on the subject. The author spent 1920 and 1921 in Australia and New

Zealand. But before he departed, Conan Doyle met Harry Houdini while the magician was traveling through England. Conan Doyle had long admired him, and the two quickly became friends--even though Houdini had no use for table rapping, seances, or spiritualism.

In 1922, Conan Doyle finally convinced Houdini to attend a seance where Jean Doyle acted as the medium. She claimed to have contacted Houdini's mother and proceeded to write out a long letter in English. But unbekownst to her,  Houdini's mother had known almost no English! Houdini publicly declared the Conan Doyles as frauds, terminating the friendship.

That same year, Conan Doyle published The Coming of the Fairies, along with two pamphlets, espousing the existence of fairies. The books were a response to two photographs produced in 1917 by Frances Griffith (age 10) and Elsie Wright (age 16). The photographs both depicted fairies in a Yorkshire garden. Though the photos were dismissed as a hoax, Conan Doyle loudly stood up for their authenticity--making him a laughingstock. His sanity came into question. 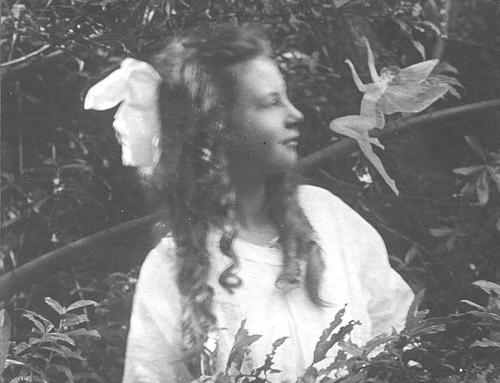 Dogged Dedication to the Movement

Even in the face of such debacles, Conan Doyle persevered. He spent 1922 and 1923 delivering lectures on spiritualism in the United States. And in 1928, he went to South Africa, along with a number of European 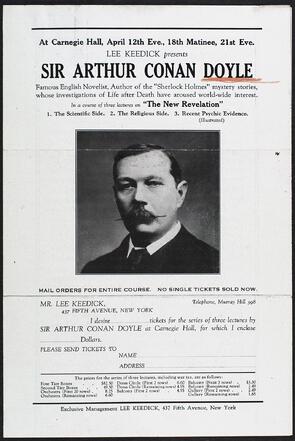 countries. Renowned in the field, Conan Doyle was even named the honorary president of the first International Spiritualism Congress in Paris. He claimed to have spoken with numerous great men from beyond the grave, including Joseph Conrad and Cecil Rhodes.

Toward the end of his life, Conan Doyle often expressed that he'd rather be remembered as a spiritualist than as an author. And immediately after his death, he attained that. It had long been rumored that Conan Doyle and his wife had worked out a system for communication after one of them passed away. And on July 7, 1930, five days after the author's death, crowds overflowed Royal Albert Hall. They came to see the seance where medium Estelle Roberts presided. Conan Doyle's wife, Jean, sat in the front row. Roberts claimed she clairvoyantly saw Conan Doyle sitting in an empty chair. She conveyed a message supposedly from Conan Doyle to his wife--but no one else heard it because Roberts' was drowned out by organ music!

Contrary to Conan Doyle's wish, he's remembered fondly as the legendary author behind everyone's favorite detective, Sherlock Holmes. His literary creations easily eclipsed his endeavors as a spiritualist, which are now little more than an interesting footnote to history.