Stephen Crane accomplished much in his short life. Dead from tuberculosis at 28, the author left behind a body of work that captivated readers and significantly influenced writers like Ernest Hemingway. His first novel, Maggie, narrated the titular character’s fall from grace with a frank moral ambiguity that is now ubiquitous in contemporary fiction, film, and TV, but at the time was essentially unseen. Yet not only did Crane help pioneer modern narrative style, of course his most famous book, The Red Badge of Courage, remains well-read and enjoyed to this very day. 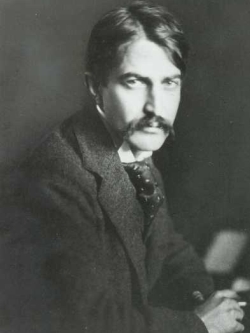 Stephen Crane was born in Newark, New Jersey, in 1871, and would begin a necessarily early career for such a brief life. Here are six facts about the beloved and influential American writer.

1. He had a strenuous Methodist upbringing

Stephen Crane’s parents were devout Methodists. His mother led a crusade against drinking, even showing as a demonstration the way an egg in a glass will curdle when exposed to alcohol. To boot, Crane’s father was a Methodist minister, who condemned not only booze, but frivolous enjoyments like theatre and novels.

For a writer to become a major novelist by his early 20s (Crane was 23 when he wrote The Red Badge of Courage), it is not so surprising that the milestones of life came to him fast. Crane not only contracted tuberculosis very young, but began reading at age 4. He took to vices early, too, having smoked cigarettes and drunk a glass beer while at the fair by the age of 6.

3. He had an exciting start

Crane wrote the first draft of his debut novel, Maggie, while at the University of Syracuse, which he entered with only the vague idea of wanting to become a journalist (he experimented with mining engineering, but failed the classes). He rented an East Village apartment in Manhattan when he revised his manuscript, which concerned the seedy and impoverished underworld of Manhattan’s tenement, brothels, and taverns. No one would publish the risque book, and Crane self-published it under the pseudonym Johnston Smith, and his friends threw him a jubilant party. An impressed William Dean Howells even invited the talented young upstart to tea.

4. He had a marketing mind

To promote his yellow-covered, self-published debut, Crane hired four men to read the book conspicuously along the elevated train along the Bowery. Though a clever early instance of guerrilla marketing, the tactic had no appreciable impact on sales. 5. He wrote about war so well, people thought he was a veteran

The young Crane was born after the Civil War that he depicted in The Red Badge of Courage, but that didn’t stop people from presuming that such rich depiction must have come from a writer who knew the experience of war firsthand. “The extremely vivid touches of detail convince us that he has had personal experience of the scenes he depicts,” wrote the Saturday Review. Later, as a reporter on the Greco-Turkish War, Crane would witness the din of battle with his own eyes. His knowledge of the real thing would lead him to confess to the writer Joseph Conrad that his own depictions of battle was “all right.”

6. He stuck his neck out for the marginalized, and suffered the consequences

Stephen Crane spent time reporting on the Tenderloin, a section of midtown Manhattan known for its brothels, transgressive amusements, and illicit economy. One day, he was helping a prostitute named Dora Clark onto a cable car when a policeman arrested her and her friend for soliciting. Crane thought it was wrong to arrest her for doing nothing wrong, and to save her Crane claimed to be her husband.

Clark was arrested anyway, and Crane was deterred by police from meddling in the case, but appeared nonetheless to testify the next morning. “Do citizens have no duties?” he wrote in his defense in the newspaper the next day, but his reputation was already being dragged by its association with a socially disgraced urban environment. Even Theodore Roosevelt, police commissioner at the time and a fan of Crane’s writing, would cease his friendship with Crane, and his career as a reporter was essentially destroyed by the scandal.

The author would spend the last three years of his life traveling and writing, making visits to Cuba and England and Greece, before dying in a German sanatorium in 1900.