Few celebrities are renowned for their sheer variety of talent like Steve Martin. We all know him as an exuberant Hollywood comedian whose career spans five decades, famous for performing in films such as The Jerk and Three Amigos. His stand up acts reveal his many skills, including everything from juggling to music. Aside from comedy, Martin is a Grammy-winning banjo player and an advocate of Americana music and bluegrass. He is an astute art collector, and once sold an Edward Hopper painting for $26 million. And finally, he is a talented writer and author. 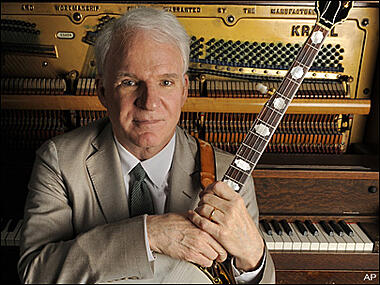 Steve Martin has been a writer for his entire career - beginning with his stand-up material and films like Roxanne and The Jerk. He has since published nearly every type of writing imaginable; his ouevre contains screenplays, essays, novels, plays, children's books, a memoir, and even a collection of tweets. His first book was a collection of essays entitled Cruel Shoes, published in 1979.
Nearly twenty years after Cruel Shoes, Martin published his next book, Pure Drivel, a collection of humorous essays originally published in The New Yorker. The essays are  endowed with the same outlandish humor that first brought Martin to fame. For example, in an essay called "Writing is Easy," Martin's narrator insists that "writer's block is a fancy term made up by whiners so they have an excuse to drink alcohol." Silly characters narrate and populate the pages of every essay, yet behind the jokes there's always a glimmer of truth.
After Pure Drivel, Martin wrote prose narratives which were markedly more serious than his previous works. In 2000, he published the novella Shopgirl about a bored clerk in a department store and the odd love triangle she finds herself in. Martin eventually wrote the screenplay for Shopgirl's 2005 film adaption, in which he played a starring role. 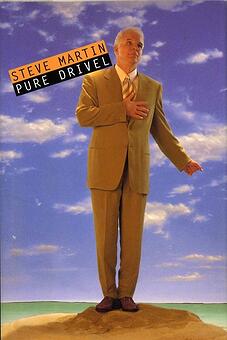 Martin has since written two novels - The Pleasures of My Company (2003) and An Object of Beauty (2010). The latter book follows Lacey Yeager, a charismatic rising figure in the New York art scene, allowing Martin to showcase his artistic knowledge. The novel itself includes 22 reproductions of actual artworks, all of which are important to the story. In 2010, while promoting An Object of Beauty, Martin's enthusiasm was at the core of a peculiar controversy. When being interviewed at the 92nd St Y in New York City, the audience became so fatigued about the art-oriented discussion that the organization refunded every attendee's ticket. The audience, expecting Steve Martin the comedian and Hollywood celebrity, instead got Steve Martin the art collector.

Aside from the struggle to manage expectations, there aren't many downsides to having such diverse talent. A wealthy man, Martin has the prerogative to write when only he's inspired. In addition to his successful essays and novels, he has composed the widely performed play, Picasso at the Lapin Angle, the children's book The Alphabet A through Y with bonus letter Z, and the earnest and funny memoir Born Standing Up. Indeed, not only is Steve Martin one of the most talented men in pop culture - he is one of the the most talented in the world of publishing as well.