Excitement has been building about this year's Nobel Prize in Literature! The winner is traditionally announced the second week of October. The Nobel Prize is certainly the most prestigious award in literature, and it's been conferred on the world's best authors since 1901.

While we're all familiar with modern winners like Doris Lessing and Harold Pinter, the very first winner of the prize is relatively unknown today. Sully Prudhomme, also known by his full name Rene Francois Armand Prudhomme, was a French poet and philosopher who wrote during the mid-19th century. He holds the distinction of being the first winner of the Nobel Prize in Literature. 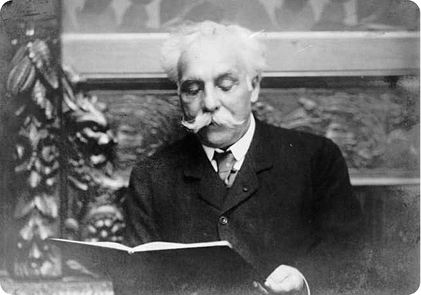 Prudhomme studied as a young man at Lycee Bonaparte and had intended on a career in engineering. But poor vision interfered with his study, so Prudhomme found work at a steel foundry. He would later work at a notary's office, where he would study law on the side.  Prudhomme was 25 when he published his first collection of poems. Encouraged by its positive reception, Prudhomme embarked on a new career path.

As Europe shifted away from the Romantic period and toward Symbolism, Prudhomme and other French poets founded a movement called Parnassianism. Named after Mount Parnassus and first exhibited in the journal Le Parnasse Contemporain, the movement emphasized "art for art's sake" and the musical quality of verse. Its members asserted that poetry should deal in deeper questions of human meaning and science, and should avoid overly sentimental language and emotional activism. The movement was clearly inspired by Lucretius' De rerum natura, and Prudhomme eventually published a verse translation of that poem's first book.

The first Nobel Prizes were awarded in 1901, five years after Alfred Nobel donated 94% of the fortune in his will to recognize individuals who "have conferred the greatest benefit on mankind." Prudhomme's contemporaries that year were Jacobus H. van't Hoff (Chemistry), Wilhelm C. Rontgen (Physics), Emil A. van Behring (Medicine), and Jean H. Dunant with Frederic Passy (Peace). Their accomplishments included the development of pressure laws and thermodynamics, which are considered the most important and comprehensive laws in natural science; the discovery of the first X-rays; the development of antitoxin for diphtheria and tetanus; and the establishment of the International Red Cross.

Prudhomme won the Nobel Prize for Literature over Leo Tolstoy--a decision that caused contention in some literary circles because his critics considered Parnassian poets "competent but uninspired" and believed a Victorian poet ought to have been chosen to win the award. In its recognition of Prudhomme, the Nobel Foundation cited his poetic composition, "which gives evidence of lofty idealism, artistic perfection and a rare combination of the qualities of both heart and intellect." Incidentally, Tolstoy is one of a dozen authors who are thought to have deserved the prize but never received it.

The Nobel Prize was only one of several honors Prudhomme earned during his life in literature. He was elected a member of the French Academy in 1881, serving on the 40-member board for 26 years. In 1895, he was awarded the highest decoration in France when he was named a Knight in the French Legion of Honour. Prudhomme wrote dozens of translations, essays, and poems about topics as varied as war, solitude, and happiness, the most popular of which was one of his first poems about love, "Le Vase Brise" ("The Broken Vase," 1865).

Late in his life, Prudhomme gave up verse. He lived in the suburbs of southwest Paris and suffered from attacks of paralysis while writing essays almost exclusively about philosophy and free will, and working on his book about the religious notions of Blaise Pascal (La Vraie Religion selon Pascal, 1905). He died suddenly on September 6, 1907 and was buried at the Pere Lachaise Cemetery in Paris.