Susan Sontag: philosopher, literary critic, academic, political commentator, humanist, essayist, novelist, celebrity, diva, activist, zeitgeist; there is no one label in her repertoire that she didn’t engender a polarizing opinion on. With her trademark hair boasting an austere white stripe, Sontag shot to celebrity status in the 1960s, when she not only branded herself physically, but also made sure to be seen at shows, launches and Hollywood parties, laying the framework for a diva's reputation for haughtiness and mercurial behavior. She was observed berating any clerk or waiter who didn’t treat her with proper deference and imperious reverence. She was either venerated or villainized, either as a counter-cultural hero or a posturing pop celebrity. Never one for people-pleasing, Sontag voiced her opinion on culturally controversial issues.

Sontag, born Susan Rosenblatt on January 16, 1933, spent her first five years in New York living with her grandparents and being cared for by relatives until her father died of tuberculosis. She found refuge in books, feeling alone at a very early age and bored with her external environment. Her inner life–the only one she controlled–became paramount. She felt childhood was a terrible waste of time, an idea she would expand upon with the concept of a revolutionized education system that would eliminate education for the years 12-16.

Despite a difficult childhood, Sontag grew into a sociable young woman, letting her anger at the unfairness of the world draw the then nine-year-old into substantial novels such as Victor Hugo’s Les Misérables, declaring that this particular reading made her a socialist. Susan Sontag discovered Richard Halliburton and credits him as her biggest influence. Reading made much of the life around Susan shrink in size. She read about the war and modern life, turning to Edgar Allan Poe for her “first visions of inwardness, of melancholy, of obsessiveness, of the thrill of logic and reason, of morbidity, and of a reckless self-conscious temperament." Poe demonstrated to Sontag that literature could be a vehicle of transportation to other worlds, and even that literature could be a destination in itself, teaching her to rely on her own sensibility, excluding whatever nonliterary environment she encountered.

At a young age, Sontag fell in love with the role of the writer, who seemed to have every kind of life imaginable. She wanted to make some kind of impression on the world, no matter how indifferent that world might be. At the age of ten, Sontag produced her own newspaper via hectograph. The experience emancipated her. By the age of twelve, Sontag had come to believe she was simply serving the rest of her "sentence" as a child. She graduated high school at fifteen, and at seventeen married a sociology instructor at her school, the University of Chicago. The marriage lasted for eight years and produced two children.

In 1963, Sontag was thirty years old and a graduate of Harvard University. She had positioned herself as her generation's guide and found herself with a new readership: affluent, secure, and cosseted, they were wary of tradition and authority. These academics paid close attention to the competition among literature, fine art, theatre, movies, and photography. Fellow American literary scholar Terry Castle suggests that, “If you were a would-be intellectual feminist in those days, you had to idolize Sontag; it was the cost of doing business.” She became both an intellectual of consequence and a popular icon.

Sontag's prose style barely changed over the next forty years, and she did little of note in the realm of philosophy. Her throne as a successful critic was obtained by intellectual convention, though it has been said that any serious library contains a book of her essays. She seemed to subscribe to Walter Benjamin's adage that every sentence should contain a thought, and her writing drew attention for being both heavily worded and quite clear.

Refusing to allow herself to be confined by labels, Sontag did not publicly subscribe to feminism or homosexuality, driven by what seems to be a mix of courage and self-abandonment. Despite her avoidance of categorization, she became a role model for many feminists and aspiring female writers during the 1960s and 1970s.

Her most influential essay, “Notes on ‘Camp,'” contained in her debut collection, Against Interpretation, essentially introduced continental homosexual themes that were already conventional in other European countries, including France. One stinging critique of her work cites her as never doing anything new or different, formally with her critical prose, and that her “brilliant syntheses” of ideas simply unfamiliar to an American audience gave credit to her best literary essays as “unmatched models in the art of introduction.” This type of interpretation is balanced by The New York Review Of Books' calling Sontag “one of the most influential critics of her generation.”

When invited to play political commentator in the 1967 winter issue of Partisan Review, Sontag responded that, “the white race is the cancer of human history.” She later published  Illness as a Metaphor, where she sought to expose the fantasies and fears that are masked by the vocabulary of illness. (She would recant that statement and die of cancer in December, 2004.) During her life, Sontag remained committed to cultural criticism, explaining that it is what being an intellectual–as opposed to being a writer–is.

Perhaps Susan Sontag’s greatest contribution to the literary world is her personal journals published posthumously, separated into three volumes, and edited by her son, David Rieff. Among documenting her experimentation with bisexuality at 15, though she would never validate a sexual relationship or romantic partnership later in life with long-time intimate partner Annie Leibovitz, which would later lead to an illustrated book entitled A Photographer's Life, the early journals prove that her criticism was motivated by her attempts to get beyond existentialism to what she called a “self-transcendence.” 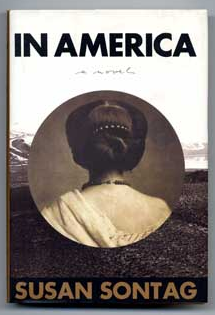 Her focus on “seriousness” was an escape from, and driven by, her personal daring and not quite controlled rejection of conventions, limits, and responsibilities. It seems, sadly, that happiness eludes her, and her intelligence cannot compensate for it. The second volume released of her private journals, As Consciousness is Harnessed to Flesh, would reveal a woman who felt as deeply and intensely as she thought, vacillating between conviction and insecurity, that she had a grotesquely inflated estimation of herself that are proliferated by her critical standards.

At times, making it difficult to play devil’s advocate, she contradicts herself often, flip-flopping on political positions and cultural ideas, giving the subjective reader plenty of objective material to opine from.  She did write one autobiographical essay, “Pilgrimage” expressing her fear of intellectual isolation and her fear of  “drowning in drivel” in suburban America.

In her obituary, it is written that, “though she changed her mind repeatedly, it was always done with style and conviction.”

“Everything I’ve written–and done,” she explained, “has had to be wrested from the sense of complexity. This, yes. But also that. It’s not really disagreement, it’s more like turning a prism –to see something from another point of view.” ~Susan Sontag

The Controversial,Visionary Authorship of Susan Sontag